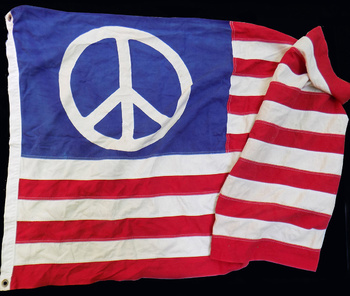 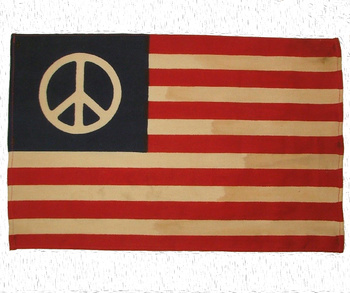 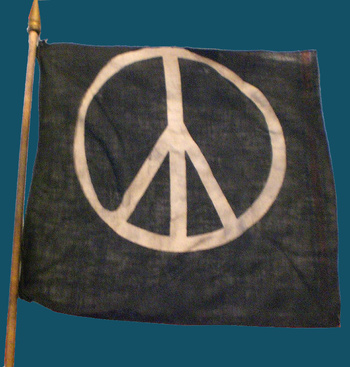 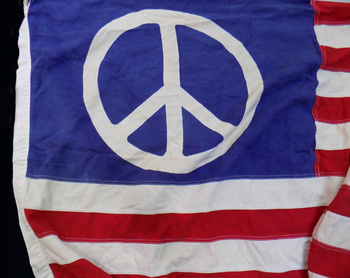 1... 3' x 5" Vintage ORIGINAL 1969 Hippie Peace Protest American Flag. Measures about 60" x 36". Acquired in 2016 from Mr. Brokenshire who got it while visiting his brother in San Francisco in the hippie period (1969-1970). When Mr. Brokenshire obtained this American Peace Flag - it was illegal! Altering the American flag like this by adding the international peace symbol was against the law. It was not until June 1974 that this law was changed under the right to Free Speech to allow such protests. Now the peace flag is an icon of the turmoil of the 1960s / early 1970s.

1969 Hippie Peace Flag Detail in Photo #4 shows you how to separate the originals from the reproductions. As you can see (hopefully) each stripe is stitched, vs. the solid screened version of the repros. The fabric used in originals is also COTTON, not the polyester or what ever chemical compound they make them out of now.

3... 11" square Hippie Peace Sign is different than the others in that it is not a bastardization of the American Flag, but simpler and in some ways more dramatic. The flag pole and flag obviously date to the 1960s by the patina. The pole is broken - PERHAPS at a protest but this came without its history sadly. Which is why I gather it when I can.

Yesterday I got notices that CW had recategorized about ten of my items. Trick is, what I zealously collect doesn't fit the normal collecting venues so it is tough. This grouping is particularly tough - maybe they need a 1960s or historical category?