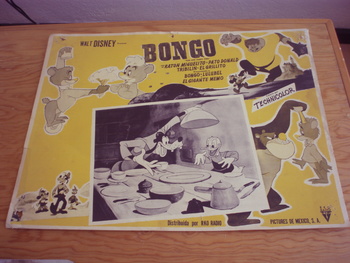 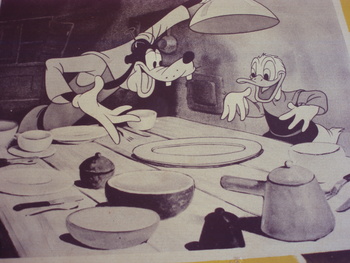 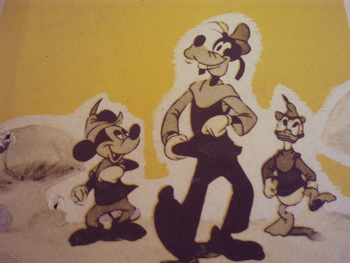 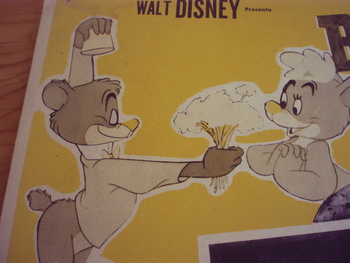 It was a good day when I came across the above pictured 1947 RKO Mexican package Walt Disney lobby card. The history behind these two movies started years before in the Walt Disney studio and both films were to be released as full single movies.

Fun and Fancy Free is a 1947 American animated musical fantasy comedy package film produced by Walt Disney and released on September 27, 1947 by RKO Radio Pictures. It is the 9th Disney animated feature film and the fourth of the package films the studio produced in the 1940s in order to save money during World War II. The Disney package films of the late 1940s helped finance Cinderella, and subsequent others, such as Alice in Wonderland and Peter Pan.

The film is a compilation of two stories, the first of which, Bongo, is hosted by Jiminy Cricket and narrated by Dinah Shore. Based on the tale "Little Bear Bongo" by Sinclair Lewis, Bongo tells the story of a circus bear cub named Bongo who longs for freedom from captivity. Bongo escapes the circus and eventually forms a romantic relationship with a female bear cub named Lulubelle in the wild, realizing that he must prove himself in order to earn Lulubelle as his mate. The second story, Mickey and the Beanstalk, is hosted by Edgar Bergen and is a retelling of Jack and the Beanstalk featuring Mickey, Donald, and Goofy as three peasants who discover the temperamental Willie the Giant's castle in the sky through the use of some magic beans. They must battle the greedy but lovable giant in order to restore peace to their valley. Mickey and the Beanstalk was the last time Walt Disney voiced Mickey Mouse, because he was too busy on other projects to continue voicing the famous character. Disney replaced himself with sound effects artist Jimmy MacDonald.

This link offers much information on these 2 and other Walt Disney animated films from the 1940's, re-releases and TV versions.