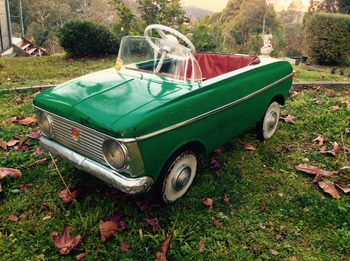 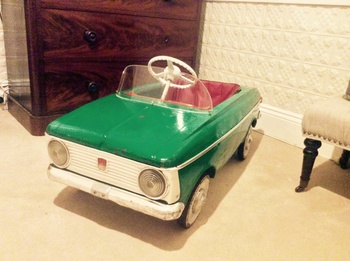 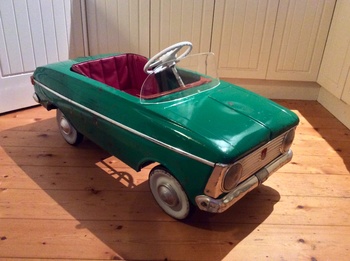 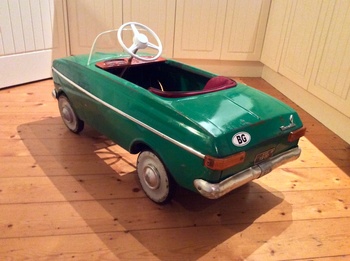 The Envy of every soviet child : An original 1980 model Moskvich pedal car by AZLK .Made in the former USSR in the same factory as the Moskvich cars of the time. Noted as one of the largest Soviet pedal cars available ,these cars were extremely expensive and hard to buy unless you were one of the favoured ones of the Soviet middle class . Although reports suggest that production for the iconic generation 2 and 3 pedal cars
(based on the Moskvich 408/412 models) ran into the 100,000 mark annually between 1974 and slowly grinding to a halt in 1994 , nowhere near that many examples remain today due to corrosive rust from the harsh climates they had to endure or kids simply being adventurous and crash testing them . This gem presented in its original apple green this example is one of the earlier build cars as it sports chrome bumpers, chrome side strips ,metal seat with a padded vinyl overlay and solid painted steel wheels with rubber tires. Early chrome bumper cars are extremely rare these days and are now considered modern art , featuring in the Retro Museum of Socialism in Varna, Bulgaria , The Russian Oldtimer Museum , Russia. and the American museum of automotive speed ,USA (yes ... really !) and doubtless countless others.