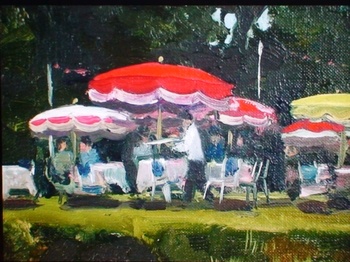 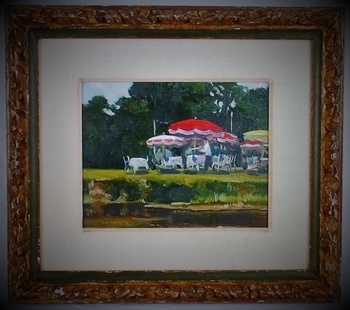 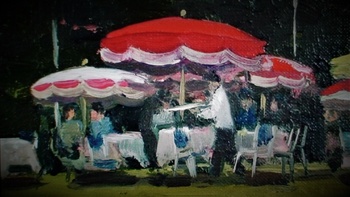 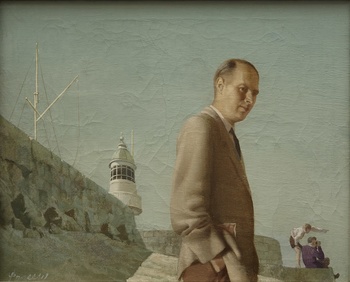 Description from internet:
Charming impressionist oil painting depicting a lovely sunny day on the lawn of a french restaurant. Henry (Harry) Robertson Craig, RHA RUA, (1916-1984), oil painting on artist’s canvas board “Restaurant near Angoulême" (Charente, France). Signed lower left: H. Robertson Craig. Titled verso. Measures 17in x 15in framed, 10in x 8in board only. There are the initials of the artist and "39" on the back which may be the year of creation.

Info from internet about the artist:

Born in 1916 to Scotch-Irish parents, Henry Robertson Craig, also called Harry Robertson Craig was a Scottish painter who worked extensively in the UK and Ireland.
He studied at the Dundee College of Art in the mid-1930s under James MacIntosh Patrick. It was there than he met his life-long partner, Irish artist Patrick Hennessy. During the Second World War, Robertson Craig served in the intelligence branch, forging maps and documents to be used by the espionage forces in occupied Europe. After the war, in 1947, he moved to Ireland, alternating between Cork and Dublin. He, with Hennessy, eventually settled in a studio on Raglan Lane in Ballsbridge.
He moved to the Algarve, in Portugal, for health reasons in 1980 and lived there until his death in 1984.
Last photo is a portrait of the artist by his partner and fellow artist Patrick Hennessy.