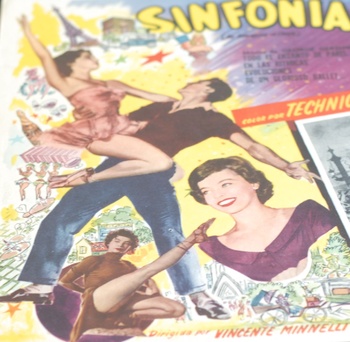 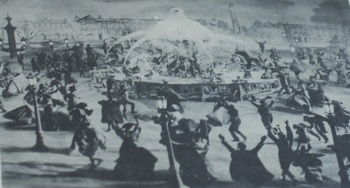 Good afternoon everyone,
This is a Mexican Lobby card for one of Gene Kelly's many movies called AN AMERICAN IN PARIS / SINFONIA DE PARIS from 1951.

Eugene Curran Kelly (August 23, 1912 – February 2, 1996) — known as Gene Kelly — was an American dancer, actor of film, stage and television, singer, film director, producer and choreographer. He was known for his energetic and athletic dancing style, his good looks, and the likeable characters that he played on screen.

Storyline
An American in Paris is a 1951 American musical film inspired by the 1928 orchestral composition An American in Paris by George Gershwin. Starring Gene Kelly, Leslie Caron, Oscar Levant, Georges Guétary, and Nina Foch, the film is set in Paris, and was directed by Vincente Minnelli from a script by Alan Jay Lerner. The music is by George Gershwin, with lyrics by his brother Ira, with additional music by Saul Chaplin, the music director.
The story of the film is interspersed with dance numbers choreographed by Gene Kelly and set to Gershwin's music. Songs and music include "I Got Rhythm", "I'll Build A Stairway to Paradise", "?'S Wonderful", and "Love is Here to Stay". The climax of the film is "The American in Paris" ballet, a 17-minute dance featuring Kelly and Caron set to Gershwin's An American in Paris. The ballet alone cost almost half a million dollars. Credits: Wikipedia

Here is a dance scene from the movie on you tube.
https://www.youtube.com/watch?v=RPpMa3gBuNk
The photo still on the lobby card is seen in the you tube dance number.