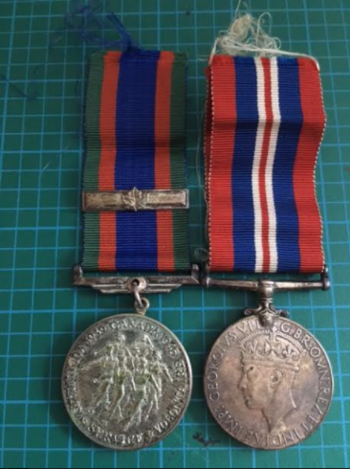 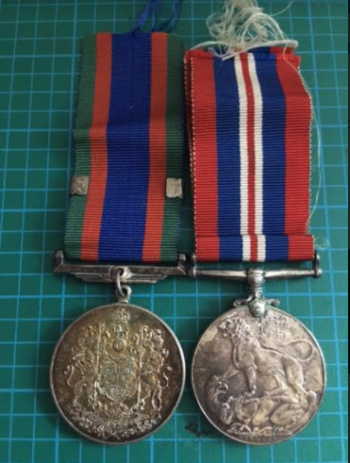 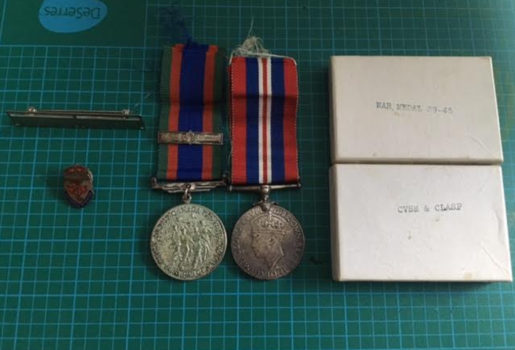 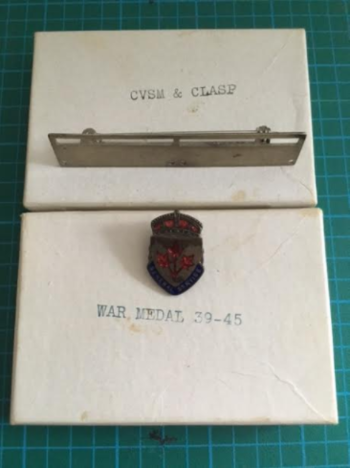 These medals and other objects belonged to my Grandfather who served in WWII. I just found these very recently, I've been wondering where these had gone for a long time. My grandfather's military medals are very important to me, and I can't imagine how scary it may have been to at first sign up. I love my collection of items, but sometimes it's the family military items that can mean the most. These are important family heirlooms. Not much is known of my Grandfather's service but we know he was in the Royal Canadian Navy in WWII and served with his Brother, Robert. I am unsure what ship(s) he served on but I know he signed up sometime during the War at Winnipeg and served on at least one ship. This lot of military items includes...

1. My Grandfather's Canadian Volunteer Service Medal (left medal). The medal is in okay condition for it's age, but does show clear again and some rust/staining. The metal part of the medal isn't in the best shape but it doesn't detract from the overall look. The medal has one "overseas" clasp. A silver bar clasp with a maple leaf at its center is awarded for 60 days service outside Canada, meaning my Grandfather served for the very least 60 days outside of Canada. The clasp sits on the ribbon, and the clasp looks fantastic. The ribbon itself is in pretty good shape however some loose threads at the end of it. Not named as issued, but attributed to my Grandfather. Overall a used but very attractive medal.

3. Canadian War Medal 1939-1945 and Canadian Volunteer Service Medal original mailing boxes. The medal would've originally been shipped to my Grandfather in these two boxes, it's nice to still have them with the medals today. The War Medal box reads "WAR MEDAL 39-45" and the Canadian Volunteer Service Medal box reads "CVSM & CLASP".
Boxes overall in good condition. Really nice addition to come with the original medals that they were in these boxes when they were originally mailed. Awarded Overall good condition.

4. Unidentified pin, name tag piece. Possible navy connection? I'm unsure what this is but it could be navy related.

5. Canadian WWII General Service pin. I think from his time in the navy. King's Crowns and reads, "General Service". Pin is in great condition for its age.

I never met my Grandfather but I heard he was a good selfless man, and despite never meeting him, he is my family military hero for joining the navy for the freedom and safety of others. Depending on where he served, he may have risked getting attacked by other frigates, airplanes or even U-Boats. These items are the only military things we know of to him, but if anything else ever turns up I will certainly post it. There is a photograph of him in his navy uniform standing on a street in Winnipeg with his brother/a friend, but we don't know where it is right now. I have seen it before and I hope to come across it again soon. My grandfather and his brother survived the war, and my Grandfather lived a peaceful civilian life afterwards. He is survived by my grandmother. When these medals were found my grandmother handed these down to me. The medals were long lost in a relative's basement until they were found a couple of years ago and now they've made their way to me. I'm sure many of us have family military relics and these are my grandfather's and I treasure them dearly. 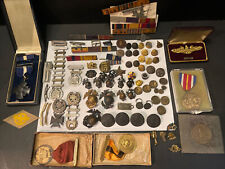 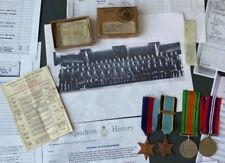 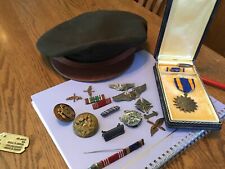