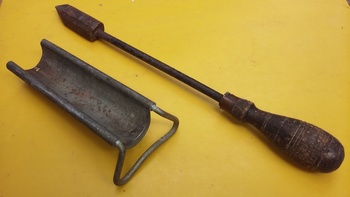 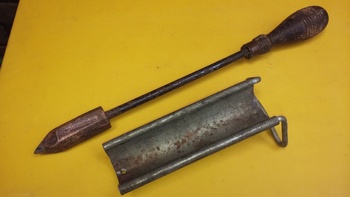 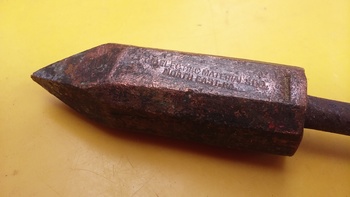 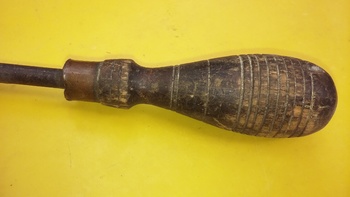 Here's another from my "NO, you're *not* gonna throw that away" dumpster dive yesterday... ;-)

This old soldering iron (aka 'soldering copper') measures about 13" long overall. It has a turned wooden handle (w/copper ferrule) at one end of its iron shaft, with a roughly 3/4" x 2-3/4" octagonal/pointed soldering tip made of solid copper at its other. In use, its tip would have been heated in a small open-flame gas fired 'furnace' on a workbench until sufficiently hot to melt the solder -- then it could be used (quickly!) until it cooled enough to need reheated. [thus, in practical usage these were often found in pairs, so one could be re-heating while the 2nd was being used, then vice-versa]

The copper tip on this example is stamped "THE ELECTRIC MATERIALS CO. NORTH EAST. PA.". I'm guessing 1900's-1940's for its age but I don't know for sure, maybe even older?

The stamped metal 'stand' pictured with it is probably newer (1950's-60's) and likely actually made for use with a high-wattage electric soldering iron instead.