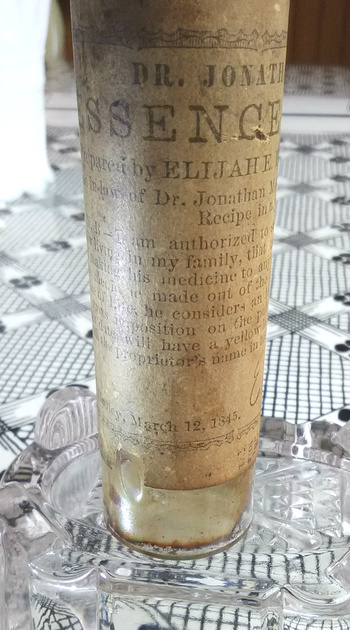 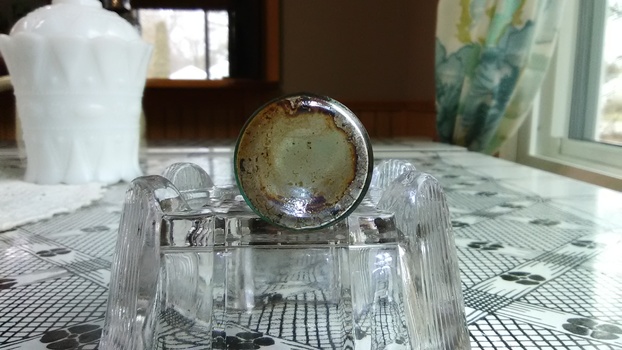 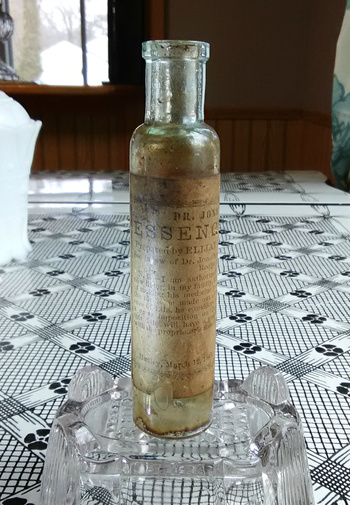 Dr. Johnathan Moore's Essence of Life. Prepared by Elijah E. Hayward, Hadley, Mass, Son-In-Law of Dr. Johnathan Moore, from the original improved recipe in my possession.
N. B -- I am authorized to say from Father Moore, who is now living in my family, that he has never revealed the secret of making his medicine to any one out of the family, and all the medicine he made out of the family, called Dr. Moore's Essence of Life, he considers an infringement on our rights , and a gross imposition on the public. The genuine article after this date, will have a yellow label on each vial accommodated with the proprietor's name in his own hand writing. Hadley, March 12, 1845.

Self-notes:
Elijah E Hayward, leader in group of young men for temperance in 1834 Hadley, Massachusetts; post-master in 1851-1853 Hadley; "Remonstrances" (forceful protests?) in the Massachusetts House of Reps., one Elijah Hayward "and others" of Hadley; County Commissioner in 1856 Hadley; Justice of the Peace in 1857 Hadley; died 1864 (gravestone), 1868 (Government web-page), or 1874 with wife having died in '83 (1902 source). Served on Supreme Court for short time???
Dr. Johnathan more, "remembrance" page in 1891. 1902 source says he was active in the "early past of the last century" and enjoyed growing poppies. A modern source I cannot fully access says he died at age 83. 1889 source says "Much" opium present in the medication. C. 1906 bottle leaves out that one or the other is still alive (which is to be expected, of course) and still retains yellow label my example claims will be used after March 1845. Still for sale in 1938.

We know the label was produced before the March date. But the bottle I would give only a 25% chance of being original to this bottle.
The cup-mold was known, though barely, to American manufacturing at this time. That it lacks air-venting tells me it dates prior to 1890, probably before the mid 1880s. But that's still a 40-year discrepancy in the style. It has a mouth that was formed in the mould, and finished off by hand (final touches). But it should, following normal bottles of the period, have an open pontil-- or at least a snap-case-- with an applied top. So, there's the 25% chance at being original to the label.