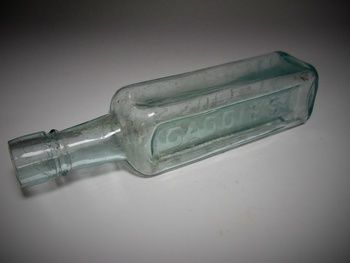 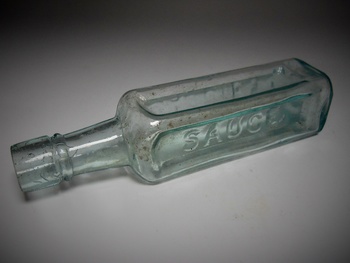 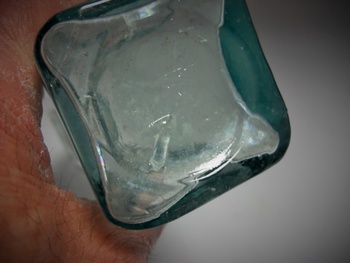 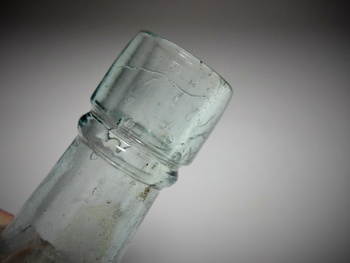 Hello Everyone.
Good Morning from Ontario.2018-04-21
I found this old Aquamarine bottle yesterday at my local thrift store, advertising "Daddie's Sauce" the ancestor of our today Ketchup, in pristine condition.
I remember long time ago, when i am living in Quebec City, go outside town digging for bottle, found quite a few when you know where to look, usual every old farm house as there little area where there dump stuff for generation, you never know what you gone a find, i wish i have all what i found at the time, :-(

This bottle is 8 inches tall by 1.75 inches square.

The brown sauce product, known as Daddies Sauce, was launched in 1904, and the ketchup was launched in 1930. The brand is now owned by the H. J. Heinz Company, having been bought as part of the acquisition of HP Foods from previous owner Groupe Danone in 2005. Production of Daddies has now been moved to Poland.

In 1899 Edwin Samson Moore the owner of the Midland Vinegar Company Aston Cross Birmingham made a visit to one of his customers who owed him a debt for vinegar. That man was Frederick Gibson Garton a Nottingham grocer who had a small sauce factory at the rear of his premises. The recently published book HP Sauce My Ancestors Legacy ISBN 978 1 4817 97023 tells the story of how Mr Samson Moore on visiting Mr Garton saw a sauce brewing in the back copper. Mr Garton explained it was his new sauce called HP Sauce. Samson Moore cancelled the debt and paid Mr Garton £150 approx £20,000 in today's money for the recipe of HP Sauce and also other sauces including Daddies Sauce.