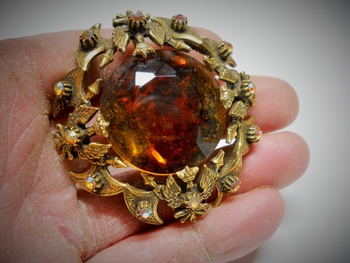 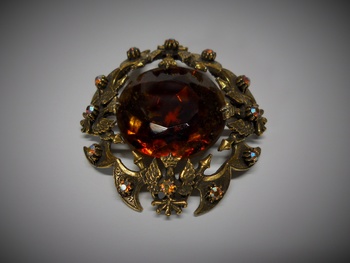 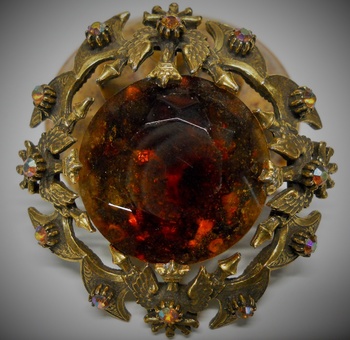 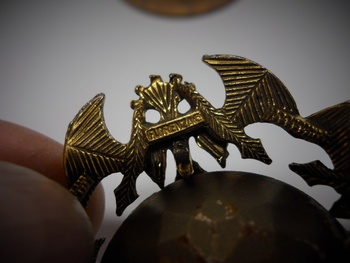 Hello Everyone.
Good Evening from Ontario.2018-04-23
I discover today a new jewelry maker "FLORENZA", i found at my local Salvation Army this wonderful brooch pendant, in strong Renaissance styles, Gold tone plate with 12 rhinestones around it with an enormous cut stone glass in the middle, amazing details throughout this piece, Crowns, Wings and Hammer Axe, completed the decor, I WANT MORE..........

This brooch pendant is 2.25 inches wide.

The History of the Florenza Jewelry Company

The history of the Florenza Jewelry Company is an important part of the story of vintage costume jewelry coming alive and manifesting itself in the US. Costume jewelry was used by women of various social classes in America to add a touch of glamour to their clothes and appearance. Many of these pieces of jewelry were well designed, colorful, crafted based on unique designs, and are now collectibles.

Florenza Jewelry was initially designed by Daniel Kasoff whose original name was Kosovsky. He started off his career in the garment industry and it was chance that gave him an entry into the costume jewelry business. He was out dining when someone stole his coat. Mr. Speier was also in the same restaurant and paid him for a replacement coat. Kasoff repaid Speier the amount as soon as he was able, and Speier, impressed with his honesty offered him a job in Speier Costume Jewelry Co.

There, Kasoff was able to gain experience in various aspects of the business and ten years later he branched out. He set up Kaywin Novelty New York in the 1930s along with Marty Weiner. He then set up his own costume jewelry company called The Dan Kasoff Company using savings he had accumulated by then.

At first The Dan Kasoff Company did not have a trademark and costume jewelry produced by the company in the 1930s do not bear the Florenza trademark on them. Supplier to Wholesale Outlets Kasoff supplied the jewelry he designed and manufactured too many wholesale outlets, which in turn, supplied to various retail outlets.

He also manufactured and supplied jewelry to various brands such as Estee Lauder, Coro, Kramer, Carnegie, and Weiss. These were made as per the designs and specifications supplied by the brand names and are not considered Kasoff designs.

Florenza Mark In 1949-50, at around the time, Dan Kasoff’s son Larry joined the business, the company decided to brand its jewelry using the name Florenza. This name has nothing to do with Florence in Italy, but is a tribute to Dan’s wife, Florence. Distinctive Features Florenza jewelry was mostly designed by Dan Kasoff and his son Larry. Even when the business expanded and others were involved in the design of the jewelry, Dan continued to approve the final pieces selected for manufacturing.

Florenza jewelry pieces are distinctive for their antique looks and resemble Victorian and Renaissance jewelry. Some of the designs make use of elements from Oriental designs. The gold plated jewelry use a variety of high quality colored stones. The craftsmanship and design are intricate and well finished. Most of the line of jewelry is ornate and heavy.There is also a line of shell cameos that are prized by collectors.

Florenza also made decorative accessories and solid perfume containers for Estee Lauder, Revlon, and others. There are key chains, picture frames, jeweled vanity boxes, and more. Many of these products were sold in up scale market stores such as Bloomingdales and Lord & Taylor.

The Florenza line also includes jeweled animal pins for pin cushions such as the famous cheetah with a movable tail.

However, Kasoff started using the mark only after he discovered that he could claim original design rights. This means that some of the original Kasoff designed jewelry are not marked with the Florenza name but are still prized by collectors because of the intricate and high quality design and finish.

Another reason why some of the Florenza jewelry pieces do not have the mark is because they are part of a set. In such cases, only the bracelet or necklace was stamped with the mark and not the earring or the stud. Apart from this, some of the jewelry produced by Kasoff was not marked for unknown reasons. Some collectors speculate that particular designs were purchased totally by a specific wholesaler who marketed it under their own brand name.

As a rule Florenza jewelry have most of the features described here. Most Florenza jewelry had stones set in Tiffany style. This means that there will be multiple faux prongs or clasps surrounding the stones. Moreover, the unsigned pieces should have the same texture, clasps, links, and clips as found in the signed pieces.

While many costume jewelry manufacturers used some of the same techniques, if you find an unsigned piece that closely resembles the signed Florenza lines, then it is more likely to be a Florenza original.

Another distinctive feature of Florenza jewelry is combination pin pendant chains is the clasp. While Florenza also produced chains with spring clasps, for the much simpler pin pendant chains, the mark used only the simple hook. The chains, however, can vary and include multiple rings, large etched rings, paperclips, faux book chain, and decorative disks.

Florenza jewelry placed emphasis on quality and fine finish. This is what made marks such as Estee Lauder and Revlon choose to use their products and designs. Legacy Dan’s son Larry Kasoff continued to carry on the legacy of his father and the Florenza jewelry line was produced until 1981. Larry Kasoff was planning a new line of jewelry at that time when he was severely injured in an automobile accident. This forced him to shut shop and Florenza jewelry is no longer produced. 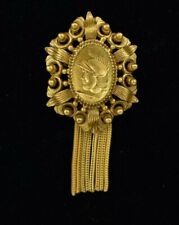 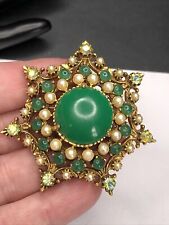 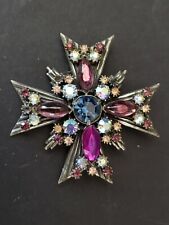 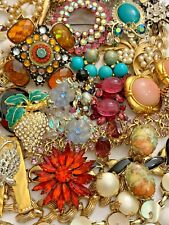