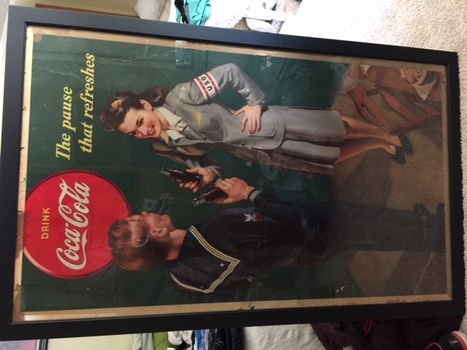 I found this large Coca-Cola cardboard sign of an American sailor and a U.S.O. Girl at a nice antique store in the edge of Alabama a year or so ago. It has some issues (someone had cut a hole in it but miraculously kept the cut out piece and put it back in at some point!!!). There is also a little water damage. But it had survived and was intact. It is marked 1943 in the lower left corner and is a wonderful relic of the WWII era. The flaws don’t bother me a bit. They are just battle scars, but there won’t be anymore with the professional framing it deserved under museum glass. Sometimes I wonder what store it went up in when it was new, what was going on in the world at the time, the Big Band music blasting from the radio and ominous stories from the battles in Europe and the Pacific. That’s the great allure of old things; those times have gone but a few things have held on to tell the tale.