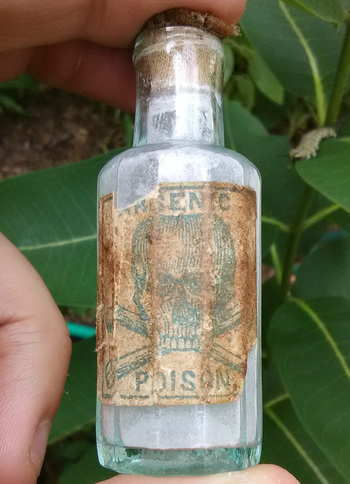 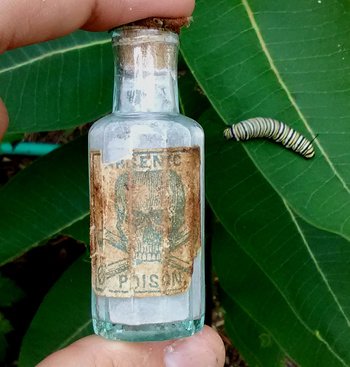 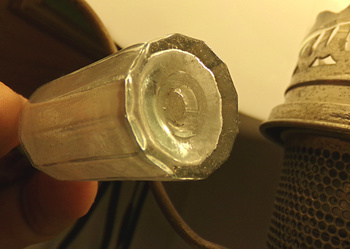 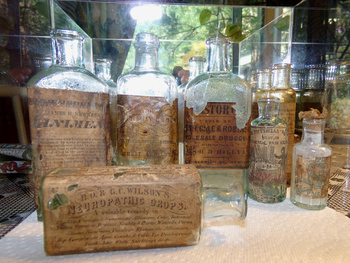 Here is a mid-1800s arsenic bottle that still contains some of its toxic and white metallic product. We are quite sure the label is about as old as the bottle, for it shows signs of much natural wear on the high-points of the panels of the glass and could be easily removed with a thin blade.

Assuming that this bottle was made after the standardisation of basic requirements for poison bottle labels (by the American Pharmaceutical Association (APA), though it is quite possible that it could date prior to that), this bottle dates to circa 1854-1860. The 1854 ruling by the APA was as follows:
"All packages or bottles [of poisonous substances] shall be distinctly labeled with the word “Poison” or a death’s head symbol, conspicuously printed."

This bottle has both the "death's head" (AKA Pirate flag, by today's humor) and "POISON" clearly printed upon it in a tealy blue ink.
This is the smallest labeled pontiled bottle I have ever seen, so I'm unsure of for whom this product was meant to be held by. The size suggests it was meant to be bought by a public customer, but the label has no druggist information, which would suggest a shop bottle. It is possible that this was a standard bottle sent to druggists by a manufacturer (or refiner) of arsenic, or a bottle to be sold in stores other than just drug-houses.

The bottle features a wonderful deep open pontil, suggesting 1840s make. Upon closer inspection, though, there appears to be ever so faint a line cutting clear across the pontil: which suggests that a hinge-mold was also involved in the manufacturing process, thus usually bumping the bottle up into the 1850s, which fits perfectly with the expected date. This bottle has older manufacturing characteristics, but that may be because of its abnormally small (see other typical 1840s-1850s bottles for comparison) size (6.8 cm, or 2.7 in.).

The bottle has a piece of thin, cheap fabric helping to seal it other than the typical cork. I have used baby oil to moisturise and petroleum jelly to seal in the moisture of the cork, as well as clear hard glue, to permanently seal the still-powdered contents and to prevent spillage from a dry, shrinking cork. While some people would like to safely dispose of such dangerous contents (arsenic never expires), I prefer bottles to still have their original products.

I have now run out of room to display the bottles neatly in my display (sealed by pressure in a somewhat environmentally controlled glass box (temperature fluctuates throughout the day, but humidity remains constant)).

Not bad for what is really (as of 2018) a 164-year-old piece of old garbage (I like bottles for the fact that they weren't meant to outlive their users!)