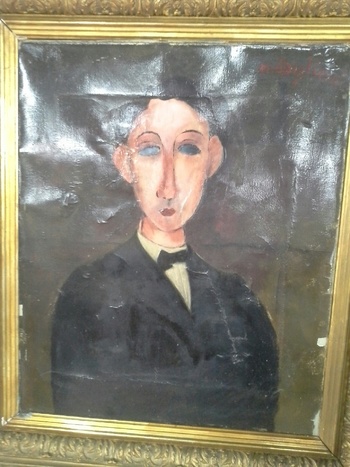 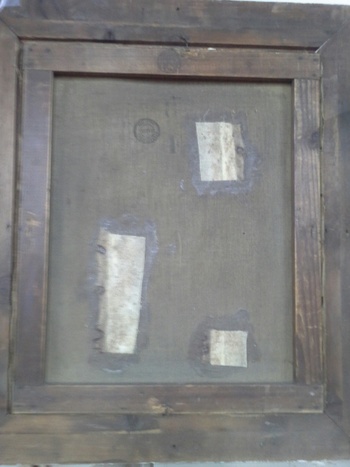 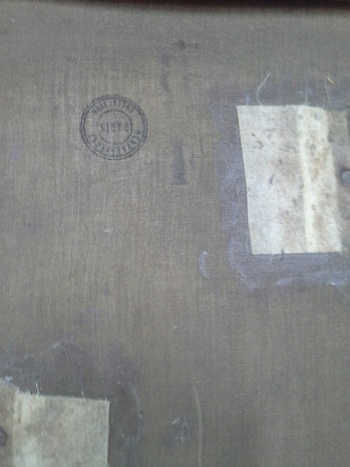 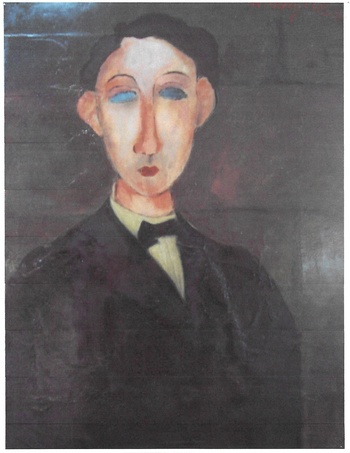 The discovery of this piece represents what I call my greatest career accomplishment. There is a local antique clock expert who was employed as a consultant when rare clock collections were consigned into one of the auction houses I worked for. On a day when he was scheduled to stop by, he multi-tasked dropping off his own consignment of a stack of vintage and antique art, most of which was by unknown artists.

I tried to keep a poker face when I glanced at the pile and saw a boldly signed “Modigliani” on this oil on canvas, attempting to glean as much detail about the provenance as possible during intake. It was simply from a decade’s worth of accumulation in his garage, he could not even recall exactly where he got it. Surely, I thought, that could not possibly be an original, then. Could such a seemingly savvy antique dealer not have recognized such an important artist by name? I knew the potential attribution from the style alone with barely a look at it. It must have been a very good student copy, I figured. Or, more likely, a fake. There is even an infamous St. Pete Beach artist who did some time in the Big House for art forgeries, and he had ties to even some of the more reputable dealers I had come in contact with in town.

This was in 2015, and coincidentally, I had just read an article the week prior to this about Modigliani breaking an auction record for a painting at Christie’s for $170.4 million. What I discovered through this event is, though he is on par with the likes of Picasso, to the point that his unmistakable style figured prominently in my history of modern art courses, he was not quite the household name of his peer.

After the clock expert had left the auction house that day, I lustfully poured over the details, immediately flipping it around to date the stretcher and canvas. To my surprise, it completely checked out, with all the telltale signs of at least being 100% period correct. So much so, that during the preview period leading up to the auction, I called up a colleague who is the in-the-field art buyer at another online art auction house I had recently resigned from working at, where I had been the inside Art Desk buyer. He did his familiar, stoic dance around it, flipping it back and forth from front to back and scrutinizing the canvas maker’s mark and specifications of the stretcher bars. He concluded that he did not trust that it was right. He concurred it was period, but would not agree it had a high likelihood of being an original. I honestly thought he was bluffing, but he never mentioned it again, aside from leaving a modest bid on it, just in case.

I was already somewhat at odds with the auction manager by that point, and when the painting was not earmarked for me to take a photograph of it, I did not question it. I waited until the catalog was printed, with her description, which I typed up, only including a bland indication that it was “Signed, Modigliani.” It was just esoteric enough to fly completely over the head of even this near-retirement-age auction veteran. Amazing.

So, I did the ethical thing, because it partly was my job to catch these types of things before they slipped through the cracks. I called up one of the “whale” type of auction customers to offer him a tip about it. Doing the right thing was made easier by my abject poverty at the time. I knew, despite all my colleagues’ fumbling, in a room full of art dealers, there was no way that many people would miss such a score. My assumption was that, even though I was free to bid, I could not possibly hope to get it for the $200 upper limit I was likely going to be able to manage. So I called the guy who would periodically drive a couple hours for the auction, and always spend thousands of dollars. Some retired doctor, or something, whose additional retirement income was a website selling antiques.

Perhaps I was too cavalier about it, too fatalistic, and should have tapped all my available resources for a loan. My thinking was, even if I could get it for a few hundred dollars, I was not the guy who was going to be able to afford an additional $500 plus to have it restored, which it was badly in need of, nor be able to sustain the expense of authenticating it on top of that. I felt that at least, if I could not possess it, someone with a significant art collection could potentially leave it to a museum one day, rather than it ending up in the hands of just some picker. In a case like this, of course, I always made sure to snap a few photos for myself.

Ultimately, the dealer I had tipped off about it ended up getting it for $450, and he had it restored. The last I heard, he had consulted Sotheby’s and got some promising encouragement about it. He was sending it to them to have authenticated, which can take months, while it remains in their art storage. The next time I saw the buyer, he was absolutely giddy about his score, and asked me what I wanted in return for my assistance. There really was no precedent for that, but in truth, I had hoped he would have the etiquette to insist, and at least pass me some gratuity, regardless. However, I responded that nothing was necessary, but that I would just appreciate a nice color print of the restored work, which he was kind enough to oblige. I just would have preferred a better print of it, on photo paper, rather than standard computer printer paper. Oh well, beggars can’t be choosers, and all that.