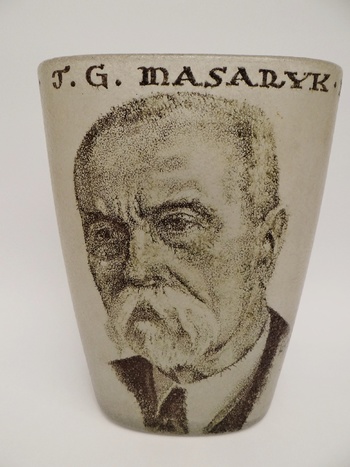 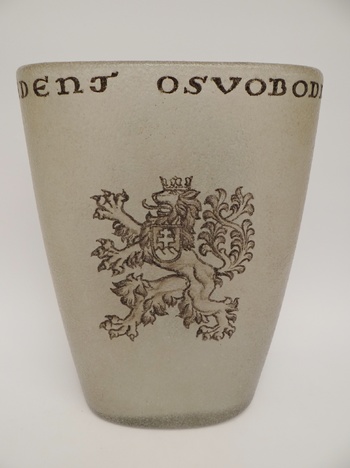 October 28th commemorates the 100th anniversary of Czechoslovakia. This vase was probably made in 1937-1938 or 1945-1947 by glass artist Bruno Riedel. On the vase is the portrait of the first Czechoslovak president Tomas Garrique Masaryk with the inscription "President liberator" and on the other site the Czechoslovak national emblem.
Bruno Riedel was born 4.11. 1904 in Kamenický Šenov (Steinschönau).
He graduated in painting, cutting and designing glass at the Kamenický Senov Glassworks School. He worked in various companies in Czechoslovakia and Germany as a designer, designer of utility glass, lighting, cut and painted glass, as well as a plant manager. In Dresden he conducted a master exam in photography in 1944. After the war in 1945-1964 he worked as a designer and leading artist in the company Lustry Kamenický Šenov. After 1968 he went to Germany where he worked in Hessen for company Palme-Walter. He died in 1975 in Gross Umstadt (Germany).