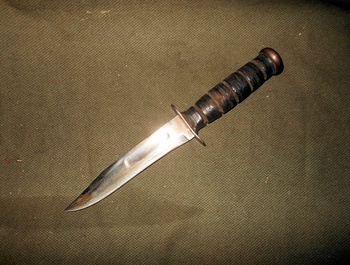 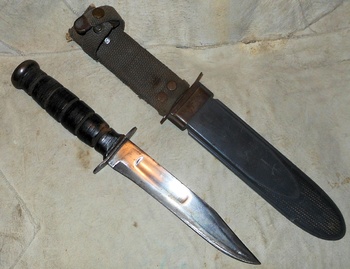 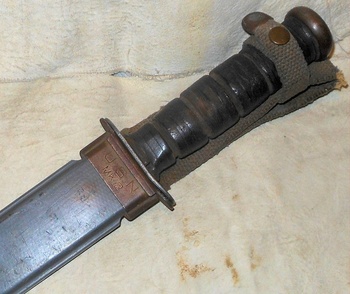 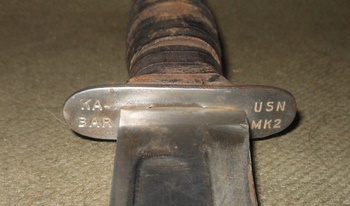 The U.S. Navy utility knife, Mark 2 was developed during WWII and was made by four different manufacturers. This version was made by Union Cutlery aka Ka-Bar and thus is an official Ka-Bar. The company changed their name to Ka-Bar although I am not sure when. Am thinking it was before WWII. This is marked KA-BAR on the guard which means 1944 or later. Earlier knives were marked on the blade.
These knives were issued to those who did not have a weapon that would mount a bayonet. Machine gunners, bazooka teams, tankers etc. This one would have used by a marine most likely as the Marines are part of the US Navy. PT boat crews could use them too. There was an army version which would be the same aside from the markings.
This was a very popular knife as it was not only useful in combat but useful as a tool. To back up a bit it replaced a combat stiletto which was good for taking out a sentry but useless as a tool. The blade on this knife goes all the way to the end of the cap on the handle making it very strong. Makes a good pry bar, can opener, hammer and so on.
This example was improperly sharpened. Cuts down on the value but it is still a Ka-Bar.