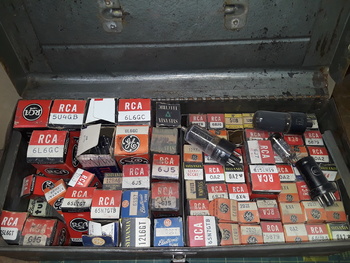 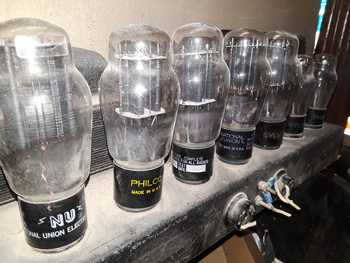 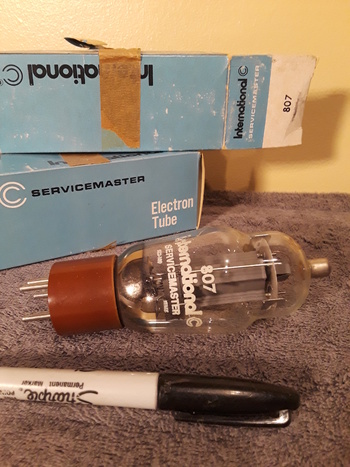 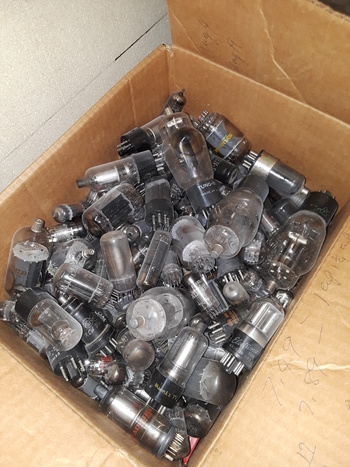 "Electron tubes" is the correct technical term for them I suppose, once key parts found in almost any electronic device from household radios and TV sets to the (then) highest-of-high technology government/military/industrial applications, at least up until the mid 1960's or so when another little thing called a 'transistor' got to becoming more common instead. Here's some of mine that were handy for pictures. ;-)

First pic is an old metal toolbox full of ~75 assorted pcs., probably mostly NOS. This box likely used to be some TV serviceman's 'spares kit' carried along to house-call repairs, which I say with reasonable certainty both because all the tubes within are relatively common examples found in all sorts of things of the time -- and because the box came as a 'free surprise bonus' along with one of my tube testers years ago when I got it. (errr...them? oh whatever, I've already shown the tube testers I think, it was the one in the wooden case...)

2nd pic represents 'tubes still stuck in things' -- in this case a nice row on a (dusty, and heavy?!) 1940's-ish audio amplifier chassis. Tubes of this general size/shape are now commonly referred to as "coke bottles", for what's probably the obvious reason...? ;-) :-) FWIW, I believe the four in the center of this pic actually represent the same exact "tube number" (read: specific electrical characteristics/function/purpose of the whole thing) meaning those four would be electrically interchangeable for the most part, even though the close eye will notice that all four are made by different manufacturers and are thus not physically identical.

3rd pic is a NOS pair which are actually hanging around here in the house. (vs. my storage room at work where all the rest currently live, and where I went digging today for their pics) They were actually 'free prizes' in their own right because of where/how they were recovered. (which also tells me exactly what they're intended for, but none of that matters here) This pair, despite their large (old) coke-bottle shape, could even be nearly the 'newest' of any of these -- their packaging (at least) suggests they are modern (late 60's+, again relatively?!) productions, made to replace a then already 'old' tube style.

Last pic is my box of 'random loose tubes'. There's probably a few hundred in there at least, of all different shapes/styles/types/ages. They've mostly been kept/scavenged from gawd only knows how many other 'discarded electrissical things' that have otherwise come and gone thru my life in the last ~40yrs. [and yup, I remember at least a few of 'those things' too, and now rather more wish I still had the 'whole thing' vs. just its tubes, but hindsight remains a b*tch, as always... <groan>]