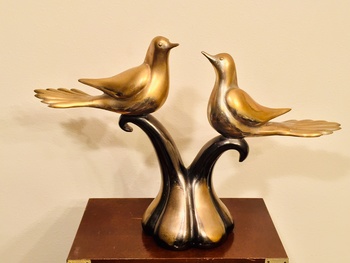 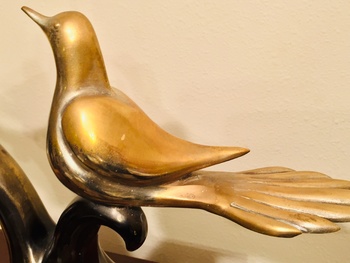 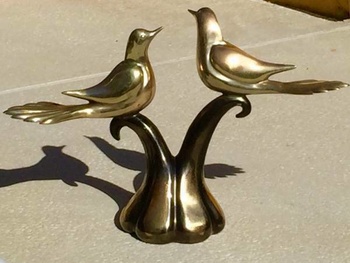 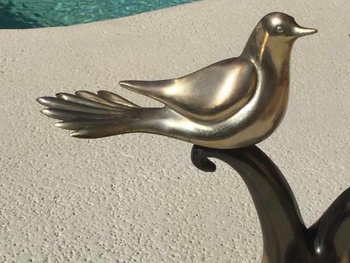 I’ve reposted the pictures of these antique doves so you could see the beautiful gold patina that’s formed on them.I had no idea they would end up this color as they were black with a thin film of black oil on them from sitting over 40 years in the back of garage.It took several days to clean and polish this to a bright silver color. That was 18 months ago and as you can see their now a deep gold color.It’s been interesting watching how this patina formed.It started at the top of the doves heads and wings that looked like small specs of rust forming.I almost re-polished it when it first started but my wife told me to leave it alone.I’m glad I did as it developed in to this color.I originally thought these were a silver and copper mixture but I’m now sure.There might be a hint of real gold mixed in.It’s 16” wide by 11” tall and weighs around 4 pounds.A magnetic doesn’t stick to it.The doves are from the 1700’s that were in a 5’ tree with amber coated branches that had apples made from stones and hand blown glass placed in it..I bet it was really something to see.This belonged to my neighbor when I lived in Toledo,Ohio in the 1960’s who was born in Japan.He was really old then ( like I am now) who had lived through both World Wars.He said the tree was destroyed in world war 2 so he took the doves to the Tokyo College of Arts in the late 1940’s.They made this artistic base for them that’s a different kind of metal than the doves.They blanched ( heated with a torch) the base then used picking oil to get this color and then tig welded the doves on.When I cut our grass I would go ahead and cut his.He finally had to go to assisted living and he gave me these doves a jade scholars stone and some really neat eyeglasses along with a few other interesting things.At the time I didn’t realize I was talking to a walking history book.Knowing what I know now I wish could go back in time and ask him more about the history of the Japanese culture and what was the prevailing philosophy of the people during that time that led Japan in to both wars.