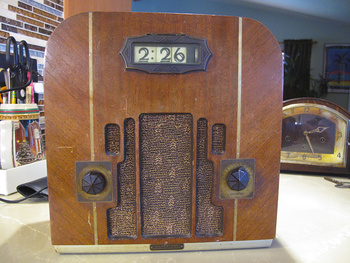 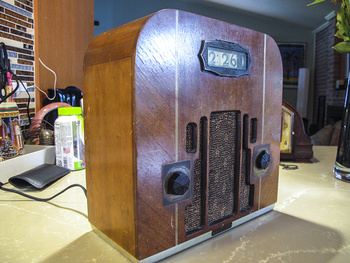 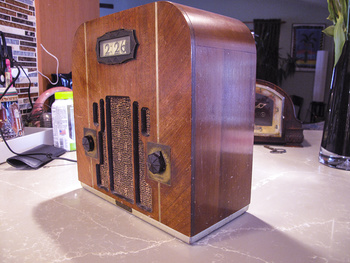 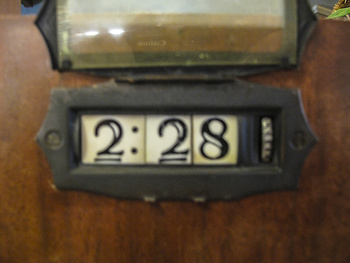 This is a unique clock radio, the Pennwood font dates the radio to 1933-35, one of the earliest fonts they used, before Pennwood received it's patents for it's clock movement and a short time after. The clock does not run through the radio.
The clock part was updated with a Pennwood movement from the late 60s and 70s when I got it. The vendor had to drill a hole on the shelf that held the clock to retro fit the new movement in. The second wheel on the new movement would not fit where the old movement was, which was originally a notched wheel which was used to prime and start the clock part. The older numerals on the old movement are sketchy because of acids off of fingertips that were used to change the time on these movements. Pennwood suggested using a pencil eraser to change the time. The function of the clock was just a clock, no alarm could be set. These radios were called "curtain burners" because of all the wax and cardboard used in the capacitors, they overheated and burned. The radio part does not work, but I may get it restored.

The radio case is in excellent condition with a few minor abrasions. It retains all four of its knobs two in front and two in the back On the front the left knob controls power and the volume , the right knob is the radio station selector. The two on the back control the wave, and DC or AC. The model number is incomplete because it was stamped unevenly. It has its Silvertone badge in the front at the bottom of the radio in the middle of a silver metal strip.. The radio is 11.5" in height, 10.5" in width, and 5" in depth.

Thanks to the member of the Antique Radio Attic I was able to get the model number which is 1403, and the date of manufacturing 1933
https://radioatticarchives.com/radio.htm?radio=3742