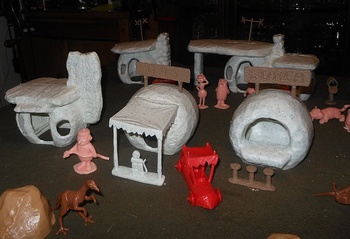 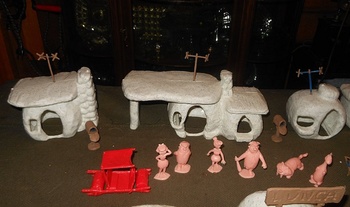 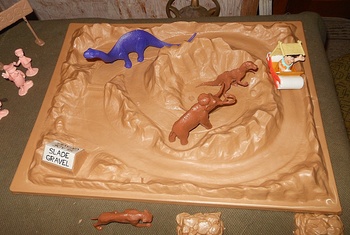 Back in the 1990s is when the reissues of classic toys began. OK there were some here and there but it became a small industry in the 1990s. The Marx Toy Company that made this was not the same Marx Toy Company of the past. It was based in Miami , FL and I believe the toys were made in Mexico. There were a few problems with quality and they were out of business in the early 2000s. This is one of their sets.
Typical of the Marx Playset reissues of that period it was not an exact replica. Most of the pieces are true to the original but the playmat with the Bedrock streets was replaced with a Prehistoric Times playmat and not useful for this set. The colors are also note the same but the speckled plastic works well for the buildings. The painted figures are not original to the set and I don't think the Slade Gravel pit was in the original. I did paint some the pieces as they were bright blue, some of the paint has chipped off.
There are some other companies doing Marx recast sets that are very elaborate and expensive.
Warning there may be a part two.