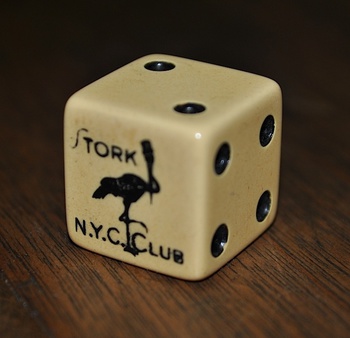 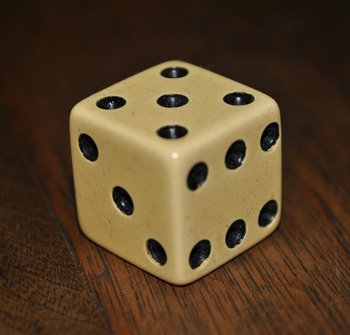 About a year ago, I posted a Limoges ashtray that my grandparents had picked up in Monaco in the 1950s. Here's a link to that:
http://www.collectorsweekly.com/stories/282-papa-davids-ashtray

A week or so ago, my mom gave me a tin of pencils and pens that my grandfather had kept. Most were boring Bics and Dixon Ticonderogas, but she thought I might like one item in particular, a die from the Stork Club in New York City.

I found a small photo of a pair of these dice here:
http://www.jitterbuzz.com/menus.html#scny
Based on when my grandparents were living in New York City, I'm guessing they date to the late 40s or early 50s, but they could be a bit older than that (like late 50s). The die shown above does not appear to be made of ivory because I can't see any of the telltale grain, so it's probably a piece of Bakelite, or something like that.

Anyone know for sure?