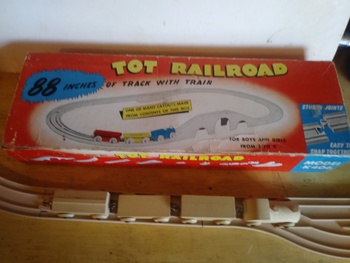 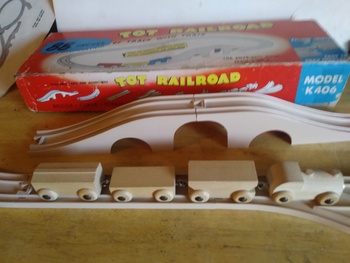 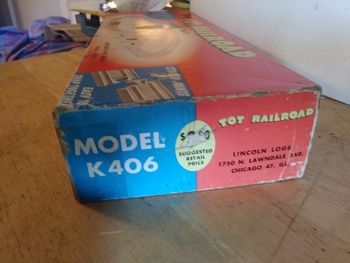 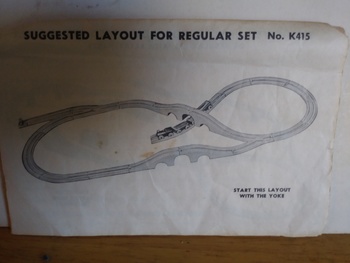 I normally collect toys oriented to an older age group than tots or toddlers. But this toy has a special place in my childhood. I've always been an avid railroad fan and as a child I was fascinated by any associated with trains. I collected Lionel trains in the late 80's and early 90's. I saw this on E-bay and I immediately recognized it, it was my first train set! I had numerous toy "floor" trains etc., but this was my first train SET that actually had track. It must have been Christmas '56 when I was 3 that I got this, it was before my electric train era a few years later. I think the set I had was the one in the last picture. This set is the beginner set but the engine and cars were very similar or exactly the same to the one I had but it had more track. When I saw the tan track and unfinished wood cars the memories came back. It made by Lincoln Logs, I didn't remember them being the .manufacturer. I've been on a roll finding faves from my childhood and this one has a special place in my heart. Around that same time my father took me to the railyard. He set it up with some guys he knew to let me tour and ride in a switch engine! That was a cool experience for a 3-4 year old railroad junkie, I'll never forget it.