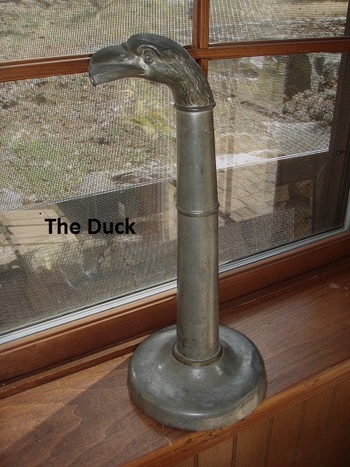 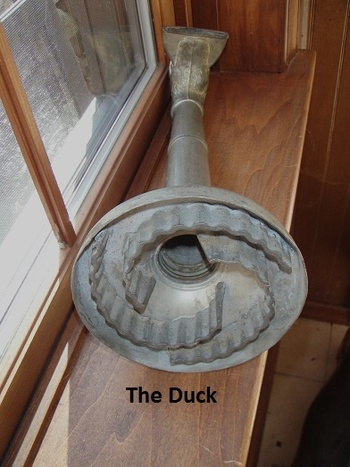 This is a tool used with the old copper boiler that farm moms used to help wash work clothing. Made and marketed in 1875 by the Hubbell Co. Called "The Hubbell's Percolator". I call it the "duck".
It is made from a soft metal, it could by pewter.
Here is how you use it:
You fill the copper boiler with water and soap and set it on the old wood burning kitchen stove to heat the water.
You put the "Duck" in the boiler followed by your soiled clothing. As the water comes to a boil,
the "Duck" will percolate the soapy water from the bottom of the boiler to the top and out the mouth
of the "Duck", thus circulating the hot soapy water over your duds.
I saw one of these "Ducks" at an antique fair in Adamstown, PA . He wanted too much, so I passed on it.
On the way home I told my wife how much I liked it. She said we should return the next week and purchase
it for my birthday The seller never returned and I thought that was the end of it.
A few months later, we were at an auction in Farmersville, PA when, low and behold, in the garage area,
among piles of clothing was "The Duck". I told my wife that we were staying at the sale because there was a "duck", and it was going home with us, I stood by my "Duck" and kept it in plain sight, bringing it out in the open when people tried to hide it. I kept alert until they were selling at that table.
Nobody could figure out what this contraption was and I wouldn't tell until I owned it. I bought it for $10.00