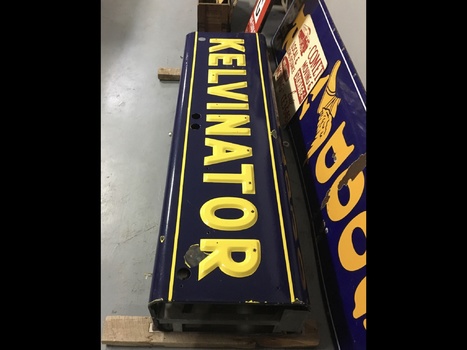 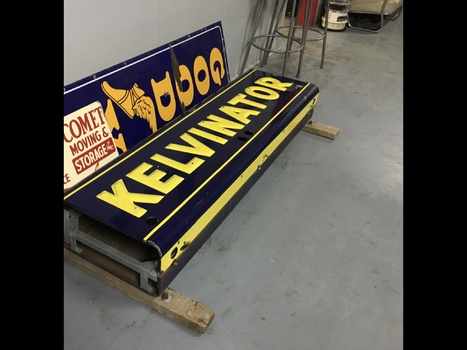 We bought this nice old Kelvinator porcelain sign in Okla as we headed to Joplin and eventually Branson on our last trip. I still haven’t figured out exactly where to display it in the Lakeside Museum Collection since it’s not Gas/Oil but I’ll find a place eventually. The sign is big and very heavy. I think it’s probably 40s era? Kelvinator began making porcelain lined refrigerators in 1914 to replace Ice Boxes that most of us still used in the early 40s. The young inventor was N. B. Wales who got financed by a Buick Auto Exec. They were eventually bought by the American Motors Car Company in the 50s And finally were sold to a foreign Company (Electrolux) in the late 60s, and while that’s more than most people want to know, it’s interesting to me.
Kelvinator invented the side by side doors on fridges, the freezer inside the fridge and other new, creative advancements we all take for granted these days.
Yes, this sign was originally a Neon lit sign.
I grew up poor and still remember the ice Man coming every few days to put ice in the Ice Box we had until we finally bought a real refrigerator.