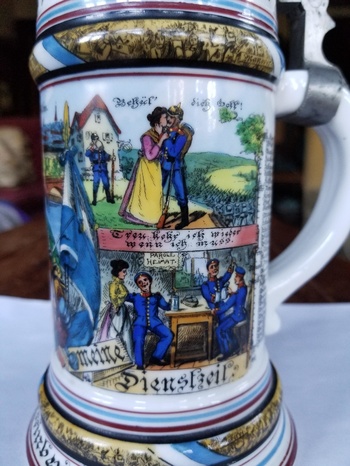 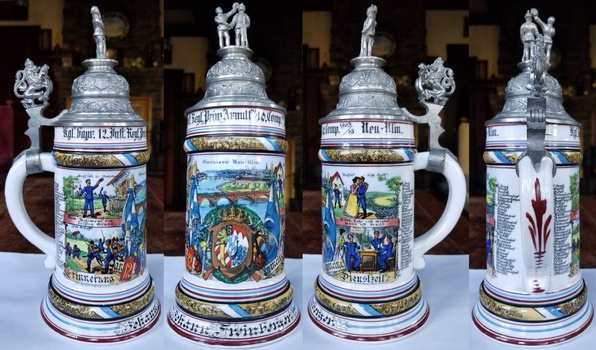 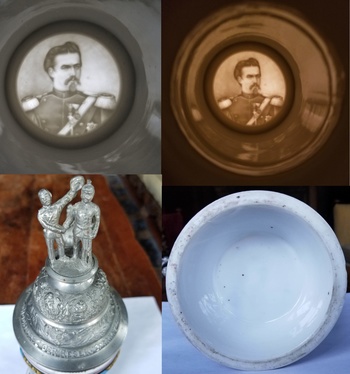 This falls outside our normal area of collecting, but we happened upon this collection of high-end steins a while back and were lucky to purchase a few of them. We believe this one is an authentic German Regimental Stein, not one of the many reproductions (though we are open to hearing otherwise). The stein was made for Johann Freinberger who was a member of the 10th Company Reserve of the 12th Royal Bavarian Infantry, Under Prince Arnulf, stationed from 1903 to 1905 in Garrison Neu-Ulm. A quick search of Johann Freinberger on both Ancestry.com and the web suggests he served as an infantryman in WWI and died at the battle of Soissons, France, 1918, at 35 years of age.

The stein is impressive in its execution, with highly detailed transfers, hand-painted highlights (e.g. buttons on uniforms, numbers, Johann's name, the company number, and the last-digit of years), brightly painted backgrounds, gold gilding, a carefully crafted pewter lid (oxidized on top, but shiny underneath), and a lithophane of King Ludwig II (the "Fairy Tale King") of Bavaria hidden at the bottom. There are no marks on the bottom of the glazed porcelain, but the handle has a red painted floral form along with additional flourishes. The colorful scenes are fairly typical ones: a veiw of the skyline of Neu-Ulm, displaying the Danube river, railroad trestle, train, and garrison; images of training, drinking, flirting, and romance. The lion thumblift and blue-and-white stripes are standard features found on Regimental steins from Bavaria.

Beyond the quality of the production (and the enormous monetary cost of the item to the reservist), the history of these Regimental Steins stands out as the names and ranks of the entire company roster are listed and the detailed scenes and mottos serve as memories for us all: "Hoch Lebe Der Reserveman" . . . "High(ly) Live The Reserveman!" 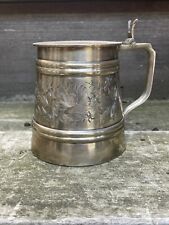 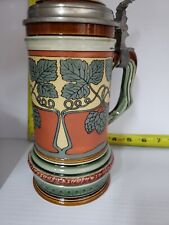 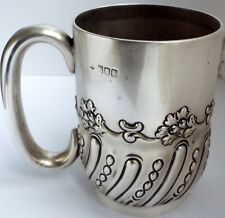 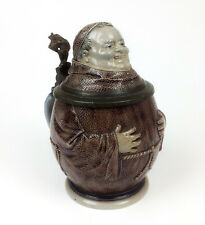