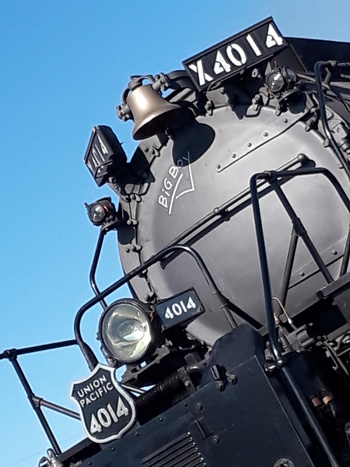 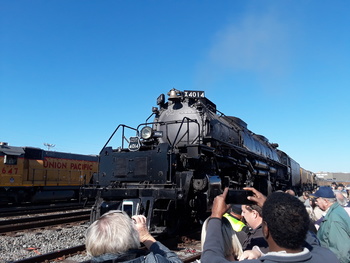 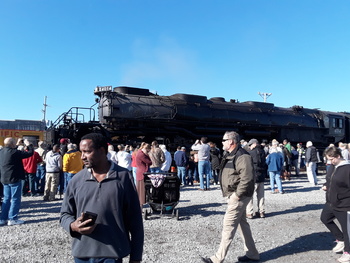 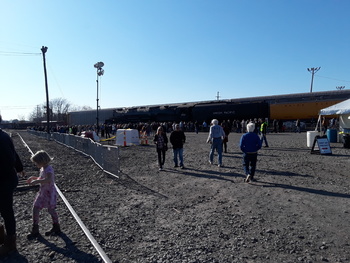 Violating my own rules just a little again, because this thing *obviously* isn't in my own personal property collections... <giggle> ...nonetheless a splendid way to spend a sunny afternoon "visiting" as it spent the day today here "on exhibit". <smile>

This is UNION PACIFIC STEAM locomotive #4014, ca. 1941, recently fully restored in the UP Steam Shops in Cheyenne, WY (2013-17 or so) and returned to active duty after spending many years on 'static display' in California after it was originally decommissioned. (1961) Now the singularly largest of the 3 current steam locos in the UP "Heritage Fleet" of various vintage RxR equipment, it is now commonly known as "BIG BOY", due to a first chalked such name written on its front by one of its original builders. (or so the story goes)

As luck might further have it, I received a 'service call' request for tomorrow morning in Conway, AR -- the first town where the BigBoy is scheduled to pause briefly after it departs here in the morning. Just so happens the location of that call is literally *across the street* from a grade crossing that #4014 will no doubt pass thru after it otherwise blocks all the downtown Conway crossings for 15 mins or so -- my hope is to be able to catch a little phonecam video of the train 'in motion', hopefully with a good dose of *whistle*, too...?? <wink><smile> Nothing like actually getting paid to go 'trainspotting', huh...?? <LOL>

Oh, and the reason for its current journey is the 150th anniversary of the completion of the Trans-Continental Railroad...I also got a nice new t-shirt with a 'golden spike' logo on it this afternoon... <grin>