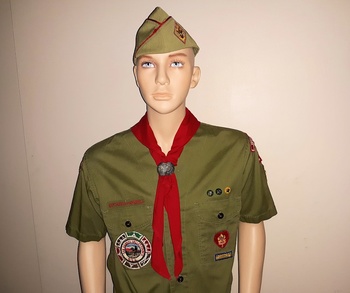 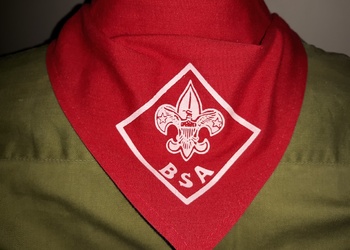 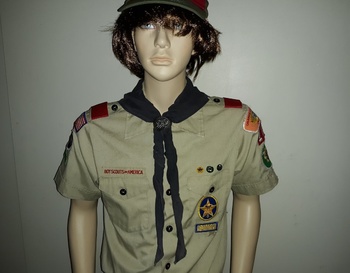 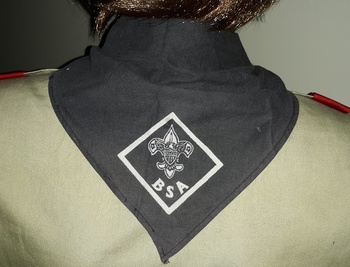 I recently got five Boy Scout neckerchiefs. Not sure how old they as the Boy Scouts have used these patterns for decades. These are the more plain neckerchiefs. They are solid color aside from the logo design on the back although the red one is stitched with white stitching. That is something rarely done now. Also the red one has a phone number with no area code. None within the last 30 years used a phone number without an area . Yes they all had area codes but there was rarely a need to mention them. So red older.
The red neckerchief is molded by Cody without his hair to give the look of a clean cut scout. The uniform and hat are circa 1960. Norman Rockwell usually painted his scouts with the solid red neckerchief. Easy to paint and red shows up well against green and is a complimentary color.
Fast forward to the 1980s or 90s. Not sure when they introduced the black neckerchief but black became popular sometime after 1980. Our scout has gone emo to match the black scarf. Back the in 1980s that would be goth.
Our local scout troop wears the black scarf and it actually looks pretty sharp.
Will have to post the other neckerchiefs next week. Noticed a few glitches when I went to edit the photos so there will be more.