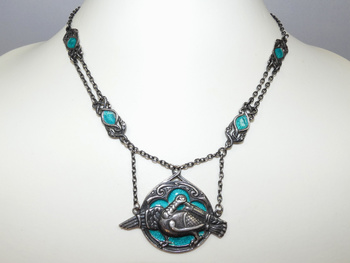 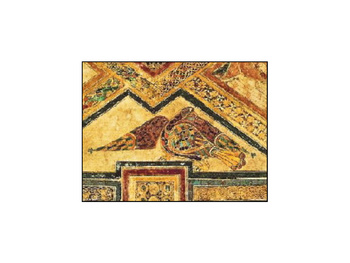 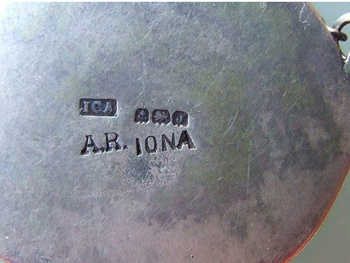 Alexander and Euphemia Ritchie were true artists in the Art & Crafts tradition. They lived on the remote Isle of Iona off the Western Coast of Scotland from the late 1890's to 1941, where they designed and hand fabricated their Celtic inspired jewellery and household items.

Iona has an incredible history as the centre of Christian monastic culture in Great Britain during the Early Middle Ages circa 6th to 10th Centuries. This time is sometimes referred to as the Dark Ages. Rather than being a dark or unknown time the period saw a great flowering of artistic endeavour including the production of the Book of Kells, probably started on Iona, and now regarded as Ireland's finest national treasure.

The Ritchies used an illustration from the Book of Kells for this design, which is known as the “Iona Dove”. It is usually seen as a brooch or simple pendant, and much rarer with the enamels and the necklace fittings. It is quite big, the main dove section is 50mm (2in) wide. It is hallmarked for Birmingham 1933, with the ICA mark for Iona Celtic Art, A.R. for Alexander Ritchie, and IONA.

The market for the Ritchies work was the tourists who came to Iona, often attracted by the Christian history and spirituality of the Isle. Among the Ritchies most popular items were Celtic interlace crosses that no doubt had a special appeal to these visitors, and which are now among their most sought-after items. I'm sure this Iona Dove necklace intentionally fell into the same category, because the Dove is a Christian symbol of the Holy Spirit (Luke 3:22, “And the Holy Spirit came down in a bodily shape, like a dove on Him").

It is a top of the line Ritchie piece and I was rapt to pick it up locally, it is a great buzz to discover such a nice thing on your home turf. 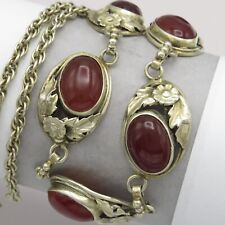 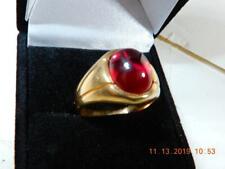 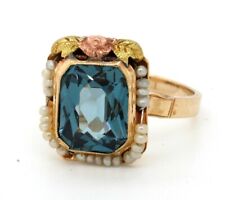