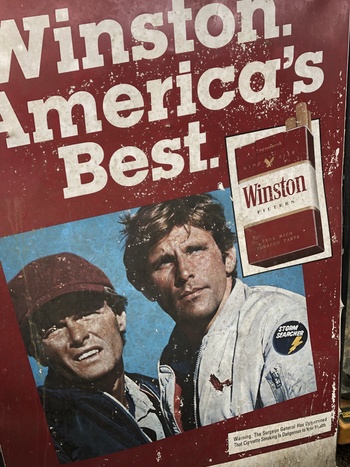 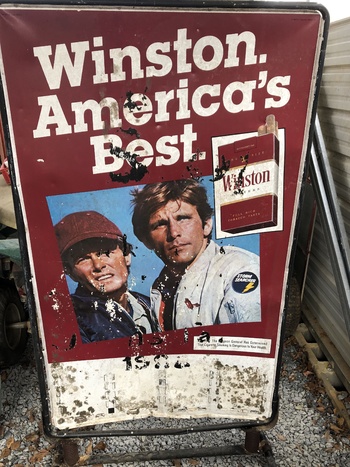 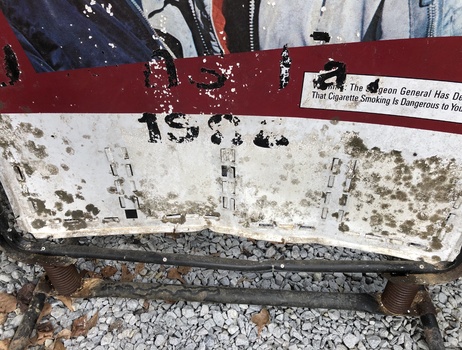 This old metal sign on a metal stand goes back a few years.
The Surgeon General’s Warning started appearing in Nov 1970 and I found some “Storm Searcher” Winston Man ads online dated 1983, so I’m guessing, based on that, my sign dates to around early 1980s.

What looks like small damaged spots all over the sign are actually flakes of white latex paint that was used at some point to paint over the cigarette ad so the sign could be repurposed to hold placards with gasoline prices at my dad’s gas station.
It looks like some black adhesive numbers, “1988” were stuck near the bottom of the repurposed sign and some of that numbering hasn’t all flaked off yet.

The sign measures about 3’ X 6’ and is very heavy.
Near the bottom of the sign are vertical slots to hold price placards. (Pic 3), Probably for “pack” and “carton” prices.
The base of the frame has springs that allow the sign to flex. Several screws have been pulled thru the sign edges, probably from this sign being moved and mishandled. There is some rust damage on the base horizontal legs.

A bit of history: the Winston Man was Alan Landers (legal name Allan Levine). 1940-2009.
Mr Landers died at age 68 from the combined effects of throat and lung cancer, emphysema and heart disease.
He smoked since age 9.
He smoked as much as 2.5 packs of cigarettes a day in posing for his advertisement work glamorizing cigarette smoking.
His modeling heyday was 1960-1970s.

In his final years, he sued tobacco companies and spoke out against smoking, hoping to save the lives of others.

I’ve never smoked and do not advocate smoking but I like my sign as a historical record of how smoking has been glamorized to make it look appealing, rather than the deadly habit it can become.

Thank you for reading all this!
Comments welcomed.