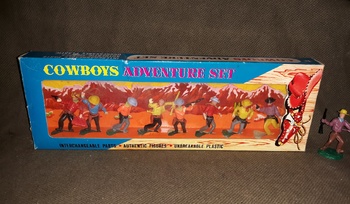 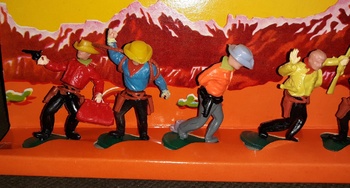 Britains are a major manufacturer of toy soldiers and one of their products were Swoppetts. Swoppetts (or Swoppets) had interchangeable4 parts like these. Heads, torsos, legs, bases, gun belts and hats were all interchangeable. And some company in Hong Kong made an unlicensed version aka ripped them off and made these.
There is no brand name on the box or any other information. The lack of a UPC symbol indicate 1960s or early 1970s. It is pretty nice packaging. Plenty of interesting poses too. There is a bank robber, a tied cowboy, an arrow wounded cowboy, a lariat cowboy and then some gunfighters.
Not quite as realistic as the other figures of the time due to the removable pieces but still nice.