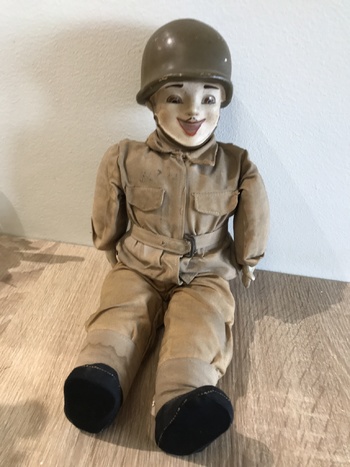 This is Sammy. Brussels was liberated by the British on 3 September 1944. A little later the British troops were followed by their American allies. Their journey from the south took them along the Chausée de Mons, across or past the Pont du Canal and along la Rue Emile Carpentier. As they passed an American GI noticed a young woman holding in her arms her one-year old baby, Marie-Pierre. Reaching down from his tank as the mother held up the baby towards him, he handed over Sammy.
76 years later Sammy remains one of Marie- Pierre’s treasured possessions.