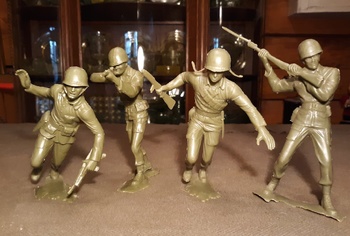 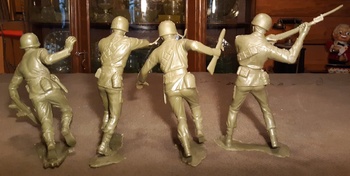 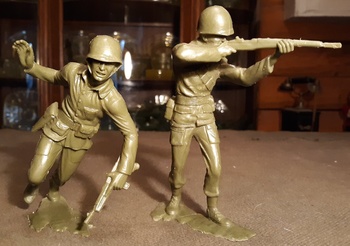 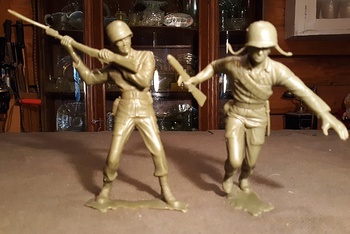 These were the first 6 inch figures Marx Toys made. I believe these were first released around 1962. A different sculptor was used for these than all the later figures. They have excellent animation but are not quite as sharp as far as the detail goes. Look a bit more waxy. Also they are not marked on the base unlike the later figures. You can tell they are marines by the uniforms. US Army wore more of a regular shirt (they were supposed to wear ties). Marines had more of the fatigue style uniform used post WWII by the army.
Going down to photo #3 we have either a sergeant or Lieutenant leading a charge. He has a pistol and a .45 Thompson submachinegun. The other is a rifleman with an M1 Garand.
Photo #4 has one charging with an M1 Carbine. Normally the carbine would be carried by a platoon leader but this figure has no pistol so a riflemen then. I would prefer the M1 Carbine over the M1 Garand as it is easier to handle. I have shot both so I know what is right for me. Note the flying helmet straps. The other is in hand to hand and is giving someone a rifle butt.
Plenty more toys and and a sign and a saw to come.