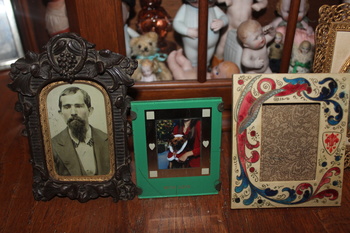 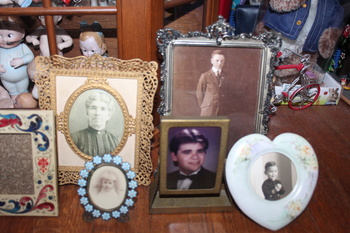 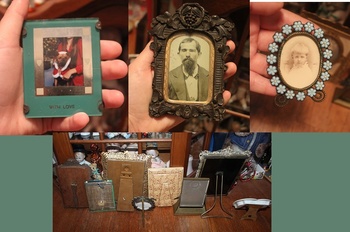 From ormolu openwork and fretwork borders to reverse-painted plates and inset Czech glass beads, this bevy of photo frames convenes its panels of visageless inserts, thaumaturgical transpositions of early photography, and a single seat occupied by one whom I dearly miss.

For the bearded fellow with tinted cheeks, many moons ago, the sun set over his eyes, leaving darkness to set out within, yet his ambrotype (collodion positive) still inhabits the Black Forest walnut frame: an extant, endemial expression upon an extinct terrain.

With much love, I placed the photo of my darling baby, Bungee, into the green reverse-painted art deco photo frame. After nearly fifteen glorious years of friendship, in late-December 2020, for the last time, I tucked in my best friend. My heart, overpopulated by lonesomeness, is envious of the Lilliputian frame's ability to enshrine the sizable, soulful eyes of my little sweetheart. The powder-blue forget-me-not Czech glass and faux seed pearl bordered frame, upheld by coiled brass feet, presents the countenance of a towheaded child, perdurably supported by a slender peg easel.

The hand-painted ignipotent phoenix, sentry of a fleur-de-lis crest, volitates over a vacant panel of my circa late-1920s ecru photo frame. With a cream faille-like linen centre, the ormolu frame focuses on the jowl-draped grimace of a Victorian woman, displayed alongside a besuited lad, dwelling in his silver-tone repoussé frame, and an adorable (likely mid-century) toddler, sempiternally exposed to the attar of unpollinated yellow cabbage roses.