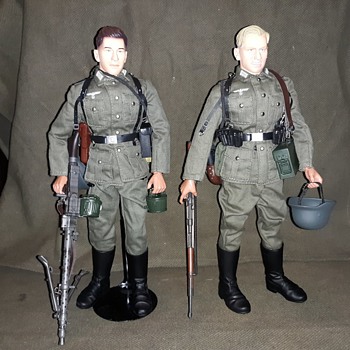 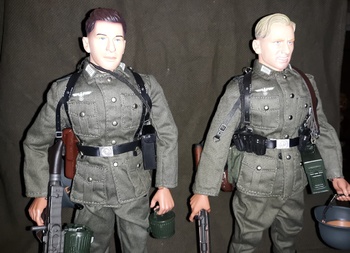 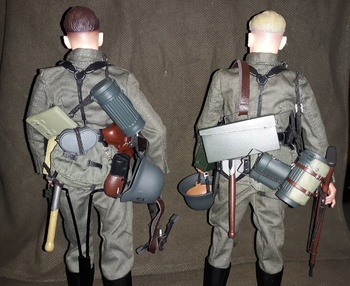 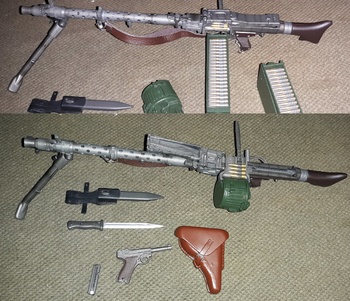 The machine gun team was the focus of German WWII infantry units. There would be a gunner with 2 assistants. Here we only have one assistant but only 2 people are needed to operate the gun. The gunner and one assistant who would feed ammunition to the gun. The second assistant probably carried extra barrels and ammunition. The MG34 was revolutionary as it could be carried by one man. The US was using the M1919 machine gun which was much heavier and used a tripod which required 2 soldiers plus ammunition etc and it could not be set up as quickly. Only the weapons platoon would have those.
Now back to Heinrich and Erich. There seemed to be a lot of focus on realistic German hair styles and as a result their helmets do not fit. Dragon makes highly detailed models and figures but as I have mentioned before things don't always seem to fit or go together. I think I got the web gear on correctly aside from the gas masks perhaps. WWII German web gear is very difficult to put on. It takes two people. US web gear just requires buckling or unbuckling the belt. It all goes on and off in one piece.
This was made in 2000. Since then the figures have gotten even more detailed. I have the accessories in the last photo. The luger has a detachable magazine.
There is plenty more action figure action to come. Probably too much so I also have plenty of other exciting items to share!