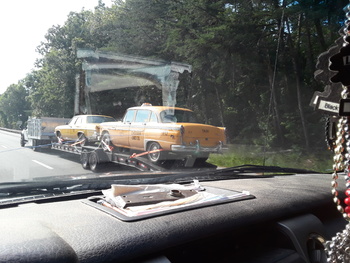 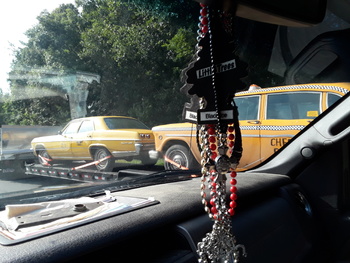 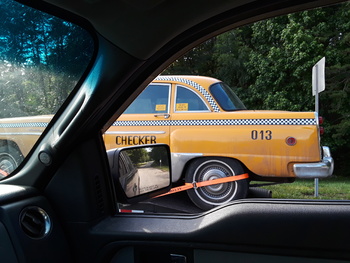 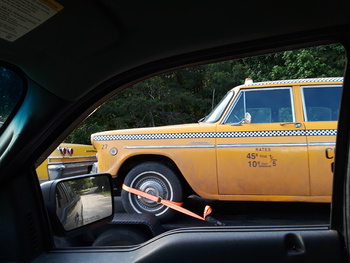 Also (sadly) not mine, these two cars spotted being trailered on I-40 in Tennessee while I was on my way home from my recent getaway trip. I recognized the CHECKER MARATHON (rear) immediately, the other is a CHEVROLET BEL-AIR. The Bel-Air is late 1960's/early 1970's I think, the Marathon probably about the same (earlier?) but it takes an expert (and/or underhood look) to tell model years of Marathons apart since their body style basically never changed over many years of production. The Marathon is wearing a "CHECKER CAB CO. #013" name on its side, while the Bel-Air is marked as a "UNION COUNTY CAB CO." car.

Pics 1 & 2 were taken through the windshield at ~70-85MPH as I approached and passed their trailer in traffic -- I figured that was the end of it. Half an hour or so later I'd pulled off at a rest area for a few minutes and much to my surprise when pulling out again, there the very same trailer had just parked by the curb with its driver climbing out of his truck. I probably should have pulled over again myself but since it was on the actual ramp back to the freeway, I simply slowed to a crawl and took a whole series of rapid-fire pics out the passenger window. (including pics 3 & 4 here) Driver dude saw what I was doing of course, and had a huge wide grin on his face when I passed him and hollered "VERY, VERY **COOL**" out of my window -- no doubt I was only one in an ongoing series of 'admirers' he encountered wherever he was with that load behind his truck?!! :-) :-) :-) :-) :-)

I know nothing about the cars themselves or how they came to be there, nor whether their taxi nomenclature is authentic from somewhere/sometime or not. I didn't actually think about that myself until showing a friend my pics when I got home, his first reaction was "movie props" which indeed might be exactly what they are...a logical possibility, anyway?? STILL, it was most enjoyable for me to see the Marathon in particular -- I remember when the town I grew up in had their little fleet of red Marathon taxis (though I doubt I ever actually rode in one) and when I was in my 20's I had a friend with a mid 60's Marathon which was a rather unique specimen in that it was one of probably very few Marathons that had *never* seen commercial taxi duty, having originally been a special order from the factory (Kalamazoo, MI) as a personal vehicle for a lady somewhere that simply wanted one. (and it had the paperwork to prove it, I wish I knew what happened to that car...)

UPDATE -- I was wrong with my guess about where the CHECKER factory was (at least) as explained here:

They were in Kalamazoo, MI instead of Cincinnati...I don't know why I was remembering Ohio, but I did know it wasn't Detroit... ;-) :-)