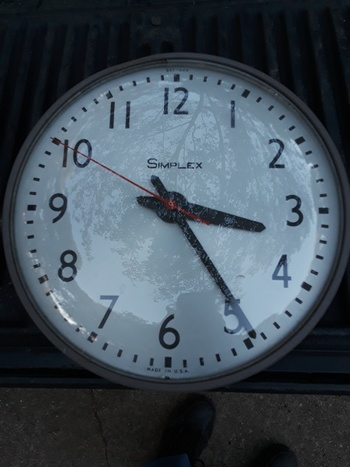 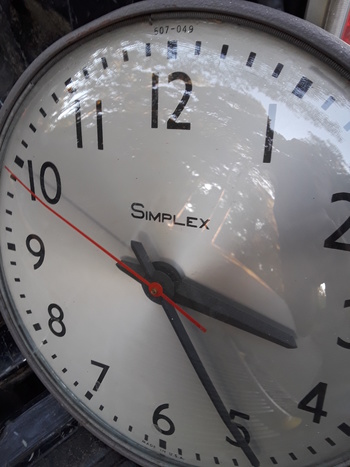 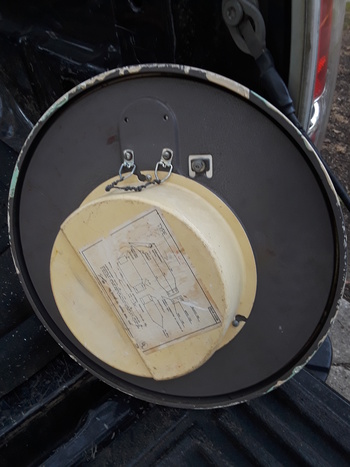 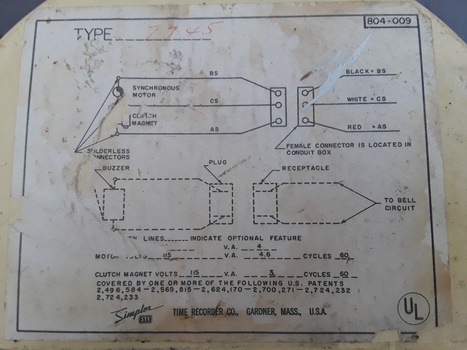 This clock was first part of a central timekeeping system in a school or office building, where it was controlled by a "master" clock somewhere else, usually in a 'main office'. It has extra parts in and electrical connections to its mechanism, allowing it to be set and reset remotely, according to the exact time kept by the master control clock. Bells or buzzers are usually also incorporated in such systems, set to sound at intervals corresponding to somebody's 'schedule'.

It is made by the SIMPLEX TIME RECORDER CO., their type 7745. Its face measures 13-1/2" across, with wrinkle-textured metal hands on a gray background under concave glass. I'm not yet actually familiar with the 'remote' operation method, having not ever managed to accumulate one of these slave clocks to play with before, but the wiring diagram on its back strongly suggests it is capable of running as a standalone clock too -- if so (and assuming it works at all?) it might very well end up becoming my new kitchen clock, to replace a modern digital 'does everything but be visible' thing my partner put up in there that I've never liked... <giggle>

Hmmm...now that I look at it again, I'm suddenly realizing that I'm *gonna havta* figure out some of its extra terminals and stuff at least -- enough to be able to SET it anyway, since it does NOT have a knob on the back for that, and the glass (though removable) wouldn't allow any convenient access to its hands...? <groan>