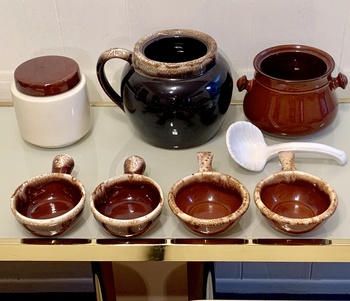 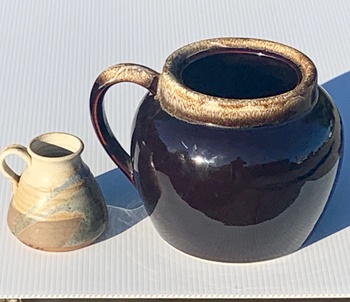 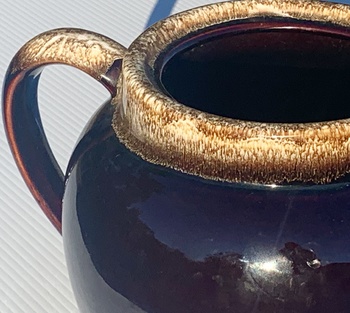 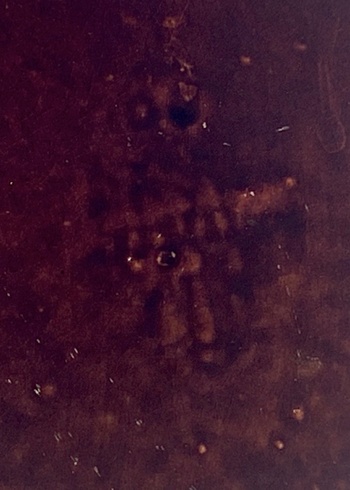 For those of you who remember the tv show Green Acres I have a very distant cousin who’s Mr Haney in real life.Every 10 years or so he shows up unannounced with a deal that’s to good to be true.I hardly know him but he remembers my children’s names and ages and even my birthday.He also has the most uncanny ability to know exactly what’s in my checking account as what he’s selling is usually right at my balance.He showed up with boxes full of coffee cups and different pieces of McCoy and Hull pottery.I lost count at 500 pieces that are all over the house.I’m from Ohio and had several relatives that worked at McCoy,Hull,Roseville and Brush pottery to name just a few companies in that area until they closed or the building mysteriously burnt down.I have a lot of pieces from there but I’ve never seen anything like this huge coffee pot or soup bowl.I’m not sure which it is that has the most artistic glaze I’ve ever seen..It has a cream color mixed with different shades of brown with purple highlights in a tiger stripe pattern that flows over to the handle. It weighs 5 1/2 pounds that holds 190 ounces of coffee or soup that has a unique makers mark on the bottom. It looks like a raccoon with a name underneath that I can’t figure out or get a good picture of it..I do know that some of the employees at these companies would make pieces of pottery for themselves.At one time there was a lot of pottery companies in southern Ohio.An employee would learn the trade secrets of making pottery at different companies and then they would start there own brand.The mixture of colors was a trade secret that the owners kept to themselves as long as they could such as the Roseville green and the brown glaze used by McCoy and Hull.When you look up the history of the smaller companies in this area a lot of them were founded by relatives of McCoy or Hull or someone that was close to the family.If anyone has any ideas as to who this makers mark belongs to I would appreciate it.Thanks for looking 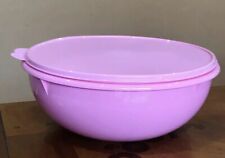 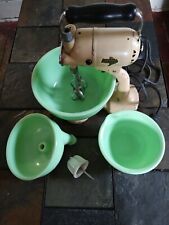 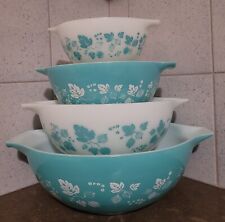