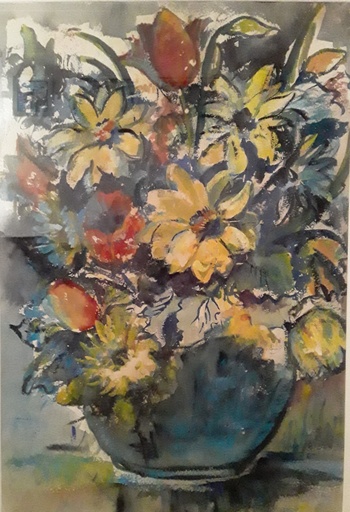 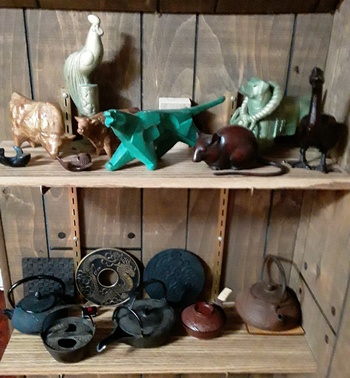 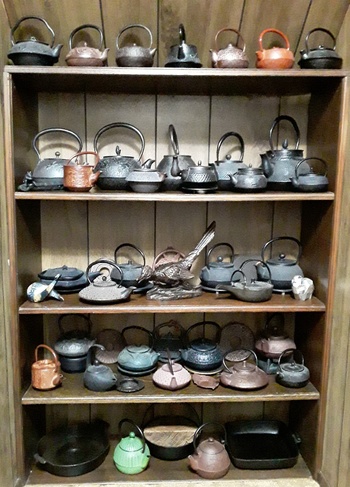 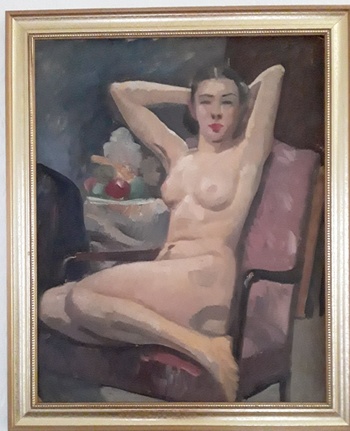 Just a few things at my new house:

1. Thrift shop find. Floral, 15" x 22" (half sheet) watercolor on paper. Has label for frame shop in a nearby city. I looked at this at a local thrift shop half a dozen times and thought it was good but never had a magnifier with me to determine if it was an original watercolor or print. Finally remembered to bring a jeweler's loupe with me and found it to be an original work. Has writing in the lower right corner. The jeweler's loupe was over-kill and I couldn't make it out. I think it may actually be a stamp by the papermaker. After looking at it twice in one day and going home in between to Google the name, I finally bought it. Trying to not buy original art as I have plenty at home. But, this is really well done. It is in a metal frame which will require quite a bit of disassembly. It may be signed and titled verso, but a project for another day. My image is so-so.

2. Display of some of my okimono on some existing shelving. Just trying to get my Japanese metal work up to my new house, so this is probably temporary. I have most of it at my new house, maybe 90% of it.

3. Display of the majority of my Japanese tetsu kyusu and tetsubin. This is a good spot for these and I may retain this. This and the okimono display are in a roughly converted upstairs space. Probably going to eventually have this area enlarged and properly redone by a professional. I think the previous owner hired a boy scout troupe to do it. Not very well done, but functional.

4. Female nude, oil on board, 14" x 22". While rooting through my storeroom, I found this painting that I bought years ago from the estate sale of Joseph Newman. I actually had to excavate my way back to a window that needed repair and this was one of the things I pulled out to either keep or donate. Newman was a well known artist. Note that the feet are not finished. Guessing he was working on this when he either died or became inactive. Bidding at the auction was spirted and I was happy to get even an unfinished work. Rather that stick it back in storage for another 15 years, I decided to bring it up to my new house.

Painter Joseph Newman was born in New York City in 1890. He attended both Pratt Institute and Adelphi College Art School before serving in World War I for the U.S. Army. At the war’s conclusion, Newman remained in Europe to travel with his new wife. Upon his return to New York in the mid-1920s, Newman established the Fifteen Gallery with several other artists. He was a member of such famed artist organizations as the L.C. Tiffany Foundation, the Salmagundi Club, Rockport Art Association, and the American Watercolor Society. Throughout his career his paintings could often be seen at institutions like the Brooklyn Museum, the National Academy, the Carnegie Institute, the Whitney Museum of American Art, and the Society of Independent Artists.

Newman’s paintings often varied in subject and style. Throughout his career he moved from genre scenes to landscapes to figurative works and from realism to post-impressionism. His most successful pieces are his colorful genre scenes inspired by various locales, such as Rockport Harbor, Maine and Taos, New Mexico.

Newman’s works can now be found in the collections of the Brooklyn Museum, the Newark Museum, the Boston Library, and the Library of Congress. 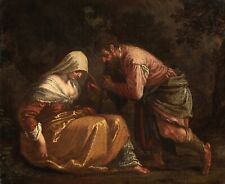 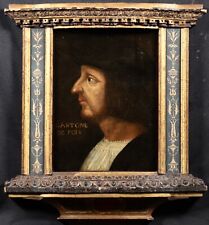 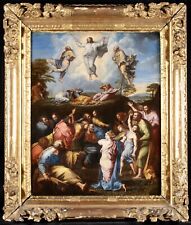 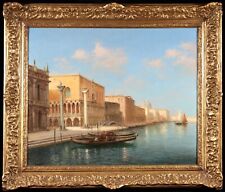