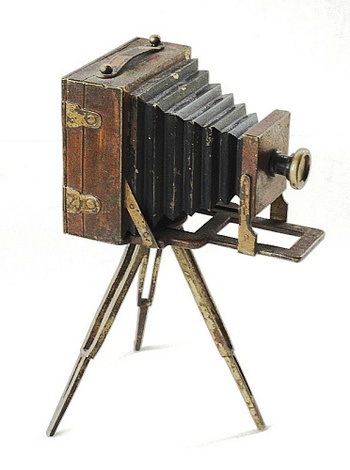 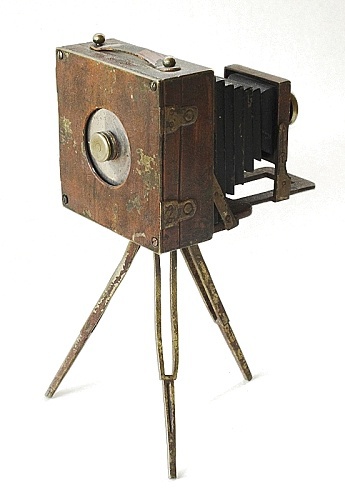 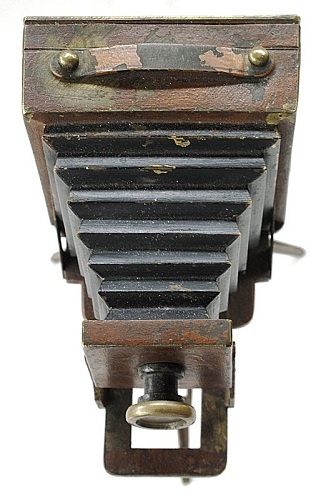 Although primarily a collector of pre-1900 American wood cameras, sometimes an item comes along that cannot be passed up.

While wandering through an antique show many years ago (looking for wood and brass cameras, of course), I found the small camera shown here. To my surprise, it ended up being a metal copy of an 1890s British field camera.

The dealer commented it was ‘picked’ from a hotel in Mexico and used as a ringer to summon bellhops. Huh? It didn’t look like any ringer I had ever seen, but the dealer dutifully demonstrated. Dang … it was loud!

Okay. I was hooked, especially since this small 7¼ inch metal novelty was a ‘dead ringer’ (pun intended) of a camera in my collection; a Lancaster Instantograph.

As seen in the pictures, it has nice detail and painted surfaces that faithfully mimic the look of an early wooden camera – right down to the wood grain.

Unlike traditional plunger style ringers, the ‘bell’ camera has to be cocked by turning the brass lens clockwise. Setting off the ringer is done by pulling foward the right knob of the simulated leather strap.

Has anyone seen similar?