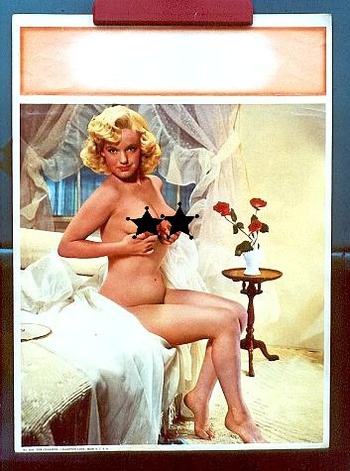 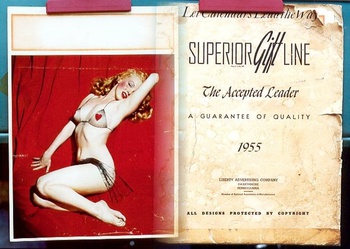 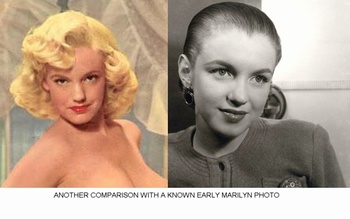 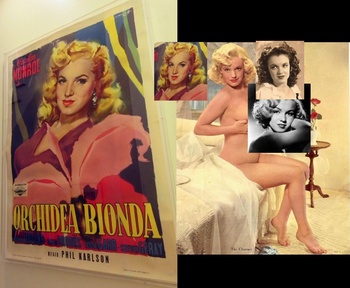 Here is sales sample calendar print from 1955 I believe it is a rare print image of a young Marilyn Monroe. I have not seen another of this particular shot on the web or in books. These prints were found in an old sale sample pack of calendar top picture options put out by the Liberty Advertising Company of Swarthmore Pennsylvania under the Superior Gift Line brand name. I have found 2 of these 1955 sales sample packets over the years and they both have had among many other prints, originals of the more popular Marilyn Monroe Golden Dream red drapery images of various versions as well. This particular image size is 12” x 16” and labeled at the Bottom left margin No. 1453 - The Charmer - Champion Line Made In U.S.A.. There is also a smaller 8x10 print with the title “The Charmer” on the image just behind the shoes on the floor. I took a known B&W face image of young Marilyn found on the web and pasted it on the Charmer Image for comparison. Does anyone else agree or know for sure that this is a Marilyn Monroe image. On the Charmer pics I’ve pasted the naughty bits over so CW will allow them here.

Have added another comparison photo to the original post.

Still not totally convinced this isn’t an early Monroe pinup. Recently found a couple photos for further comparison. Have seen since a same period confirmed pinup shot of her on a beach that was also labeled the charmer. Is it possible the widow peak could have been airbrushed out before publishing the pinup in question.