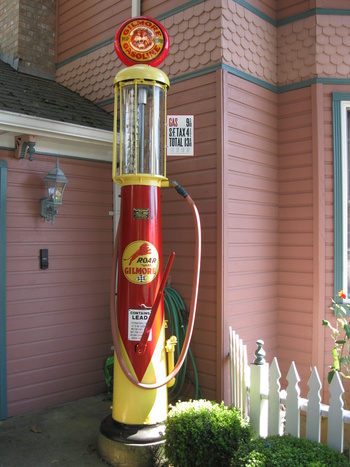 This gas pump was pretty rough when I got it. Restored it myself. Of course the globe and decals are repros, but everything else is original.
It came from a farm that a cousin of mine owned in the mid-Willamette Valley of Oregon. He called me one Monday evening and said that he had three of these old pumps on the farm and I could come and take my pick if I wanted one. I was really excited! So the next Saturday, bright and early, I went out to look them over and I knew I was coming home with one. When I met my cousin at the farm he told me that since we talked, someone came and stole the two really nice pumps, but if I wanted this old junker I could have it....
When I got it home my wife saw it and told me it was junk and now I'd probably have to pay to dump it! That's all the incentive I needed to show her she was wrong. Now, don't get me wrong, I love my wife, but once in awhile she's wrong and I'm right!....not often, but once in awhile.