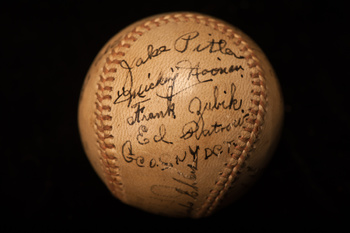 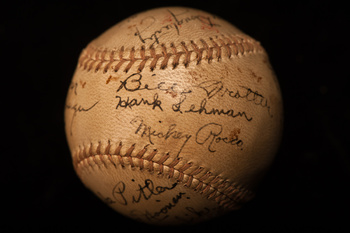 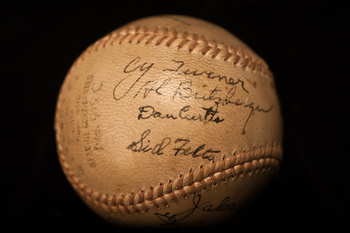 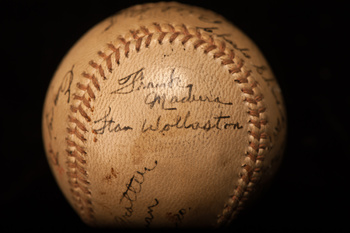 This Baseball was found in the bottom of a wooden box full of tow and tire chains, in my steps-dads garage. I was looking for a tow chain that he want me to get and when I dumped the box this ball rolled out. I picked it up and found it to undamaged and not covered with oil and relatively free of excess dirt. My step-dad had played professional baseball for about 12 years in the late 20's through the 30's to 1941. World War II put and end professional ball teams with men on them and the women leagues began. He never talked much about baseball, you had to start the conversation and ask questions if you wanted to know something. Upon see the ball he asked me to put it in one of his dresser draws for safe keeping. The only thing he could remember about the ball was it was from the last game the "Acme Brew" played at the end of their last season and that both teams had signed it as a gift to him. 30 names appear on this ball and all are readable. I have done very little research on these names but I have identified "Micky Noonan" as the 1947 Dodger's coach. I enjoying reading the names as they seam as if to be made up by some Hollywood movie scrip writer. 2 of the signatures on this ball are from players who played in 1916 and 17. Based on that I believed they were more then likely the coaches. Please if any body knows anything about anyone of the signers, please let me know. My step-dad did not sign the ball but his name was Malcome L. DeWeese a catcher. The information written above about the ball and the signed names was based on information given to me by my step-dad who was in his late 70's at the time and admitted at the time that he could not fully remember what team it was on the ball but guessed it was the "Acme Brew." Thanks to "Jameyrd" and his directing me to www.baseball-reference/minors.com which list the names of the Portmount Pirates which match the names on the ball, it leads no other conclusion but this ball was from the Portmount Pirates. 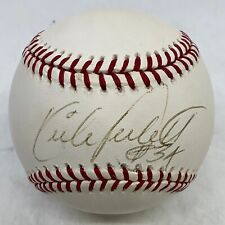 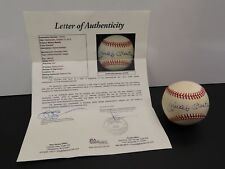