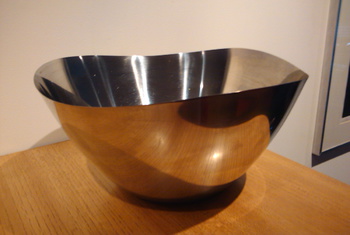 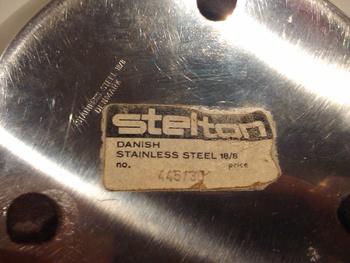 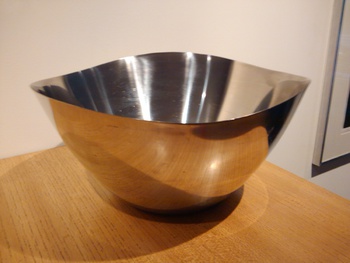 This bowl was picked up at the Surry Hills market about five years ago. It was the shape that first attracted me to it: the three curves of the rim. But when I turned it over I saw a Stelton sticker. The marks on the bottom of the bowl were just the usually seen: Stainless Steel 18/8 Denmark. The Stelton mark was missing! But it had that sticker! The sticker has all of that usual information as well as an item number 445730.

I'm still at a loss about who designed these early pieces for Stelton.

Niels Stellan Høm and Carton Madelaire met in the army and began a trading company. They linked up with a firm called Danish Stainlessnin Fårevejle, Denmark and manufactured a gravy boat that sold like hot cakes in the US in the early sixties. An early administrator/designer was Peter Holmblad, whose step-father was Arne Jacobsen. Holmblad joined the company in 1963, I think, as Export Manager.. Arne's designs date from 1967, the famous Cylinda-Line.

I'm after a gravy boat too!