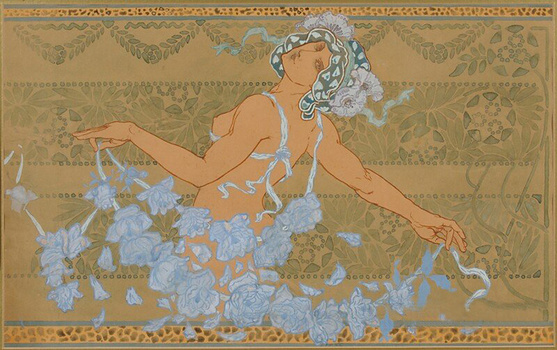 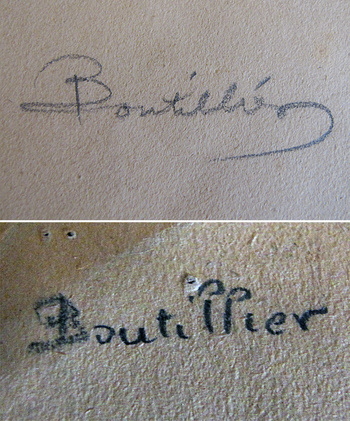 This original gouache and graphite illustration is a bit of a mystery. Attributed to Hans Christiansen, yet double signed on the back "Boutillier." Dimensions: 19.5" x 16"

The piece does not have Christiansen's characteristic initials mark on the front, but that does not necessarily exclude it being by his hand as some known illustrations in his published catalogue raisonné are also unsigned/unmarked. Additionally, the rendering of the figure and subject matter of a tasteful, if not coy, nude with her back to the viewer is a recurring theme in Christiansen's decorative works.

Now, as to the back, which is double signed, "Boutillier." This presents three distinct possibilities: 1.) the piece is titled, "Boutillier," which is French for "cupbearer"; 2.) the illustration is actually by Addison Le Boutillier, a famed illustrator and designer most notably for Grueby Pottery at the turn-of-the-century; or 3.) the piece is by Christiansen but was in Boutillier's (or someone with that last name's) collection/estate. Possibilities #2 and #3 are bolstered by the fact that the piece was bought at auction in Boston, where Le Boutillier lived and worked for the majority of his professional life.