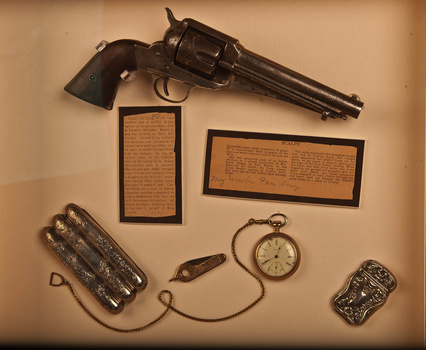 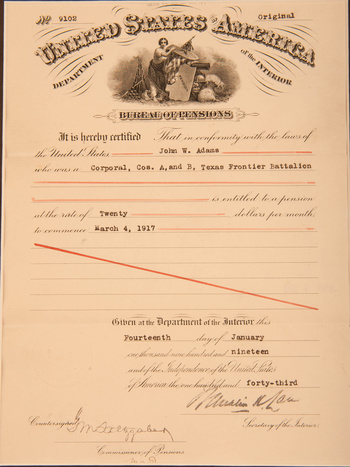 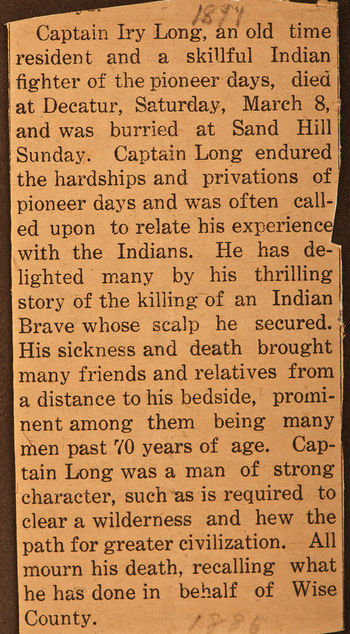 The display pictured above is made up of items which once belong to Mr. John W. Adams a Corporal in Companies A and B of the Frontier Battalion,(records also list him as a Sergeant) of the Texas Rangers in the 1870's. Mr. Adams is believed to be the first owner of this model 1874 Remington in 44 American Caliber which has had its barrel shorten by a gun smith. He also carried this sterling silver cigar case, match safe and pocket watch watch. Items like this were commonly carried by Cowboys and other men of the times. Most Texas Rangers when not employed as Texas Rangers were Cowboys. I have researched Mr. John W. Adams as much as I could as well as his Uncle, Captain Ira Long. Captain Ira Long who's 1899 Obituary is pictured above, I have on display along side the other items. I recovered this obituary from a 1870's photo album along with over a dozen tintypes of Texas Rangers and Cowboys. The family Photo Album or Bible were a command storage location for loved ones Obituaries and or locks of their hair which this album had both. In my research of John Adams I found in the book "Jeff Milton,Good Man with a Gun" University of Oklahoma press that John Adams read all dispatches as well as the paper to Captain Ira Long as part of his daily routine. Jeff Milton also reported in his book that Captain Long could not read which was not uncommon for the times. The book relates that John Adams was Ira Long son in law but this fact is reported in error, he was his Nephew. I have displayed a Department of the Interior, Bureau of Pensions, awarded to John Adams in the amount of 20 dollars a month. This is a very small sum today but would have helped out in 1919 when awarded. The Pension certificate has "Indian Wars act of March 4, 1917" stamped in the top margin. The Obituary of Captain Long is a shocking and depressing obituary, when the taking of a human life is so casually discussed. In my research of the Lost Valley fight which both Adams a Captain Long were a part of, I could not feel anything but sadness for their foe, the American Indian. The 1870's in Texas were hard times on both sides but none harder then on the American Indian. Hardbrake