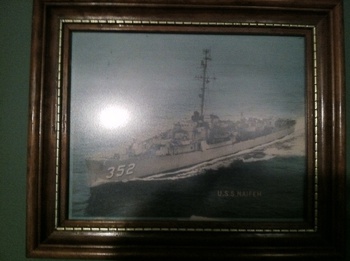 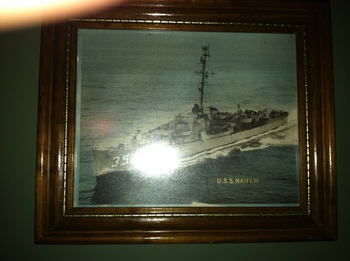 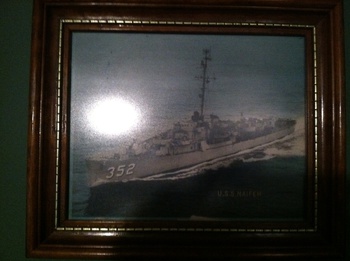 Sorry about the photo quality!

USS Naifeh (DE–352) was a John C. Butler-class destroyer escort in the United States Navy. It was named for Navy Lieutenant (Junior Grade) Alfred Naifeh (5 January 1915 – 16 October 1942) who died when the USS Meredith (DD-434) sank during the Solomon Islands campaign of World War II. Lt. (j.g.) Naifeh was posthumously awarded the Navy and Marine Corps Medal. Naifeh was laid down on 29 December 1943 at the Consolidated Steel Corporation shipyard in Orange, Texas; launched on 29 February 1944, sponsored by Mrs. Rathia Naifeh, mother of Lt. (j.g.) Naifeh; and commissioned on 4 July 1944, with Lieutenant J. S. Albert in command.Once bracketed by enemy shore fire, she successfully maneuvered out of range. With other assignments, she aided Republic of Korea Navy torpedo boats in interdiction missions against enemy supply lines. In late fall, Naifeh was flagship of the Wonsan Element Commander, protecting United States and Korean minesweepers and firing on shore targets. When USS Lewis (DE-535) was hit by artillery fire, Naifeh provided protective counter-battery fire as she laid a smoke screen to cover her withdrawal. In addition to blockade duty, the destroyer escort fired on North Korean supply movements in the Wonsan area. She returned to San Diego in December 1952.

My grandfather was on this ship during the korean war, he's told me many great storys :) btw i have his sailor suit, his utility knife and a bunch of other pics of him while in the navy which ill post eventually