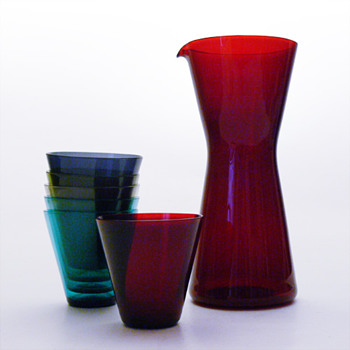 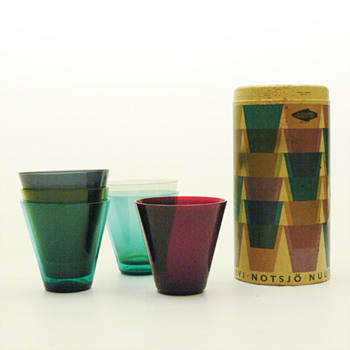 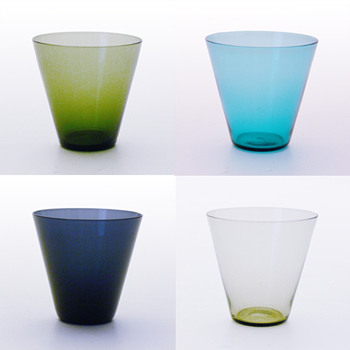 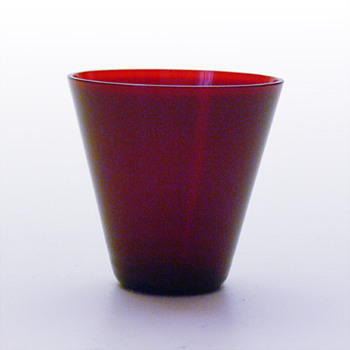 I copy the next text from the book KAJ & FRANCK by Päivi Jantunen: "This pack of different coloured 2744 glasses was exhibited at the Museum of Modern Art in New York immediately after being launched in 1955. It is claimed that the idea for Franck's Toive pack came from a cardboard box for apple jam".

The 2744 vases were first produced from 1953 to 1967 in two sizes: 9 and 12 cl. From 2011 they have been reissued (mouth blown) and made in two more sizes: , 20 and 34 cl. to celebrate the 100th anniversary of Franck's birth (which is great but I guess it will add some confusion to collectors as new ones could be sold as old ones, even if the price for the new ones is pretty high).

You can see the original package in the first pic (unfortunately I don't have the lid). On pics 2 and 3, the Kartio glasses in the five colours I've got (of the light blue one I've got two glasses), and finally on pic. 4, the complete set of glasses with the original Kartio jug in red.