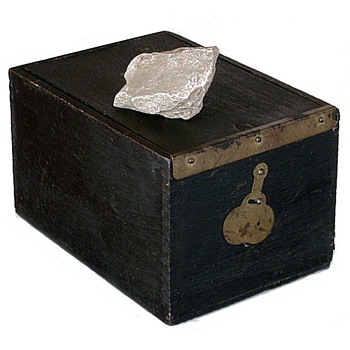 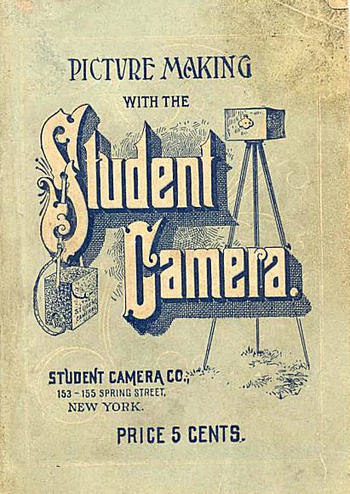 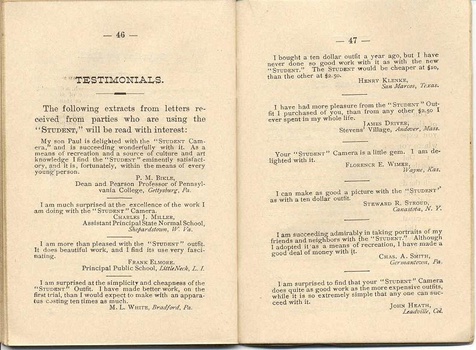 Not all wooden cameras were pretty and here is a fine example of a beginner's camera that is - let's face it - really ugly. Yet it has a great story.

Sometime during the late 1880s, a handful of obscure yet resourceful makers built cameras for beginners, children and "young amateurs." Compared to traditional equipment of the times, these were incredibly primitive devices ... nothing more than a box with a lens at one end and a sliding lid to load plates.

Construction was amazingly crude. Poor-grade pieces of wood were assembled with simple tongue and groove construction. Even traditional cigar boxes were built with greater care than these cameras.

The Student Camera Company specialized in cheap cameras made for high-school students: hence the name. The Student No.1 Camera shown here was the original model that made images on 2-5/8 x 3-3/8 inch glass plates. The shutter was simply your finger placed in front of the brass-plate hole.

Aside from its lack of good looks, what attracted me to the Student Camera was how the builder went to great extremes in portraying it as a sophisticated device. For example, the 64-page instruction booklet - an impressively large manual for this modest camera - promotes the camera as a better value because; "many of the parts that are supposed to be useful in a camera are entirely dispensed with." This comment specifically refers to bellows and double plate holders.

Digging deeper into the booklet, I came across a couple more comments that were either written seriously or purposely tongue-in-cheek. Understanding this very lightweight camera had potential problems when used outside on a platform or tripod, the booklet notes:

"If the wind blows, place a weight (a small stone for instance) on the camera to keep it still."

However, the best part of this story is about the camera being durable:

"The old-fashioned camera is a fragile and ramshackly affair, awkward to use and easily broken. The STUDENT can be thrown over a house without injury, and its manipulation can be comprehended and managed by anyone."

I can't think of a better reason to own a Student Camera outfit; accessory stone and all. Can you?