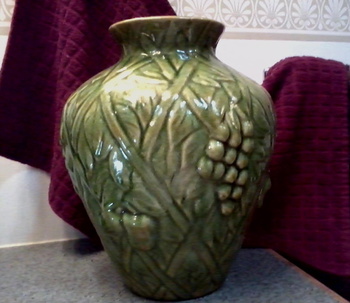 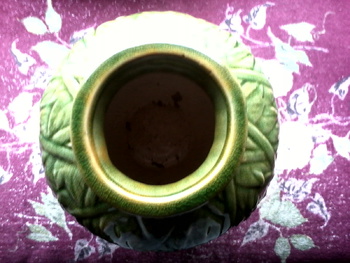 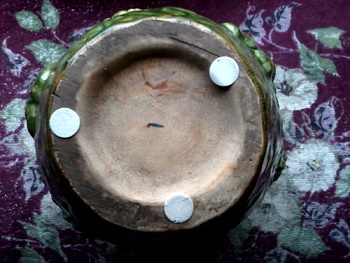 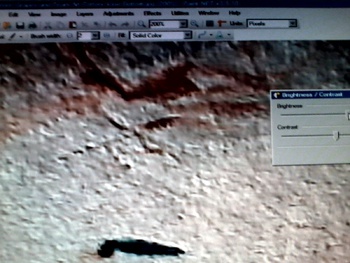 So here's hoping I still have a good eye. This came from the Salvation Army thrift store. I really liked the way it looked but I'm not sure about it's age and make. Just a hunch thing again. The price was good enough to take the risk so I did. It's really a large somewhat bottom heavy piece that's 12" high and 9" across at the shoulders. It weighs like 2 1/2 - 3 lbs. ! It's a beautiful shiny olive green /gold blended glaze with pears (I think) and grapes in relief over a lattice and leaves type background. The thing that caught my eye was the bottom . It looks like an old unglazed bottom found on art pottery. The only mark is a little bluish dash in the center.Note:I recently noticed what appears to be 2 letters above the blue mark. I ran it through the photo editor and zoomed and enhanced it with the "relief" option. Sure looks like a W and an E or F to me. I've added the picture. I don't think it's an anomaly.The surrounding areas are smoother. Still would like to know the country and the maker. Any thoughts?? The outside glaze has a lot of crazing (age/thermal shock ). The inside is glazed white. It has spatters of the green glaze dripped inside. It looks like some McCoy or Weller majolica. I didn't see anything online exactly like it. The closest thing, at least color wise with relief designs was the early unmarked Victorian majolica or Brush/McCoy and Weller but nothing as big as this. I had someone tell me it was probably an Asian made decorator piece. Not old or valuable. I really don't think so. My thought is it's either American / European and somewhere between Victorian and early 20th century. That's a broad time frame I know...lol. If not, it's still a beautiful piece -Mike-