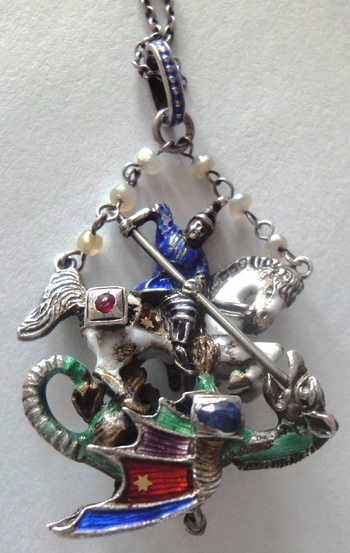 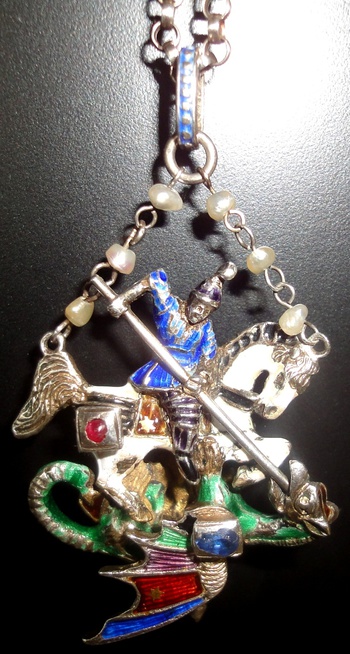 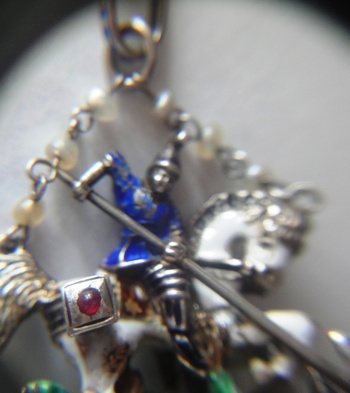 For me a stunning find and my second Austro Hungarian gem set.
A silver pendant chain with river seed pearls and a dangle silver little ball. Superb enamel work on silver with 2 small Sapphires one in front and one on the rear side, and also one small Rubin in front.
St George, with his sword drawn in dark blue enamel.
The fierce green enamel dragon with articulated moveable wings
Here the best......the Dragons wings move..they are held by 2 small Sapphires. Circa later 19th century-about 1870's.

In English folklore, St. George slew the mighty dragon. According to legend, a pagan town in Libya was being terrorized by a dragon. The locals kept throwing sheep to it to placate it, and when it still remained unsatisfied, they started sacrificing some of the citizenry. Finally, the local princess Sabra, daughter of the King, was to be thrown also to the beast, but good St. George came along, slaughtered the dragon and rescued the fair princess. At this, the townsfolk converted to Christianity. Some experts think the tale is based on the Greek myth of Perseus rescuing Andromeda from a sea monster.

Good condition with just a bit of wear to the enamel
Approx. 1.2 by 2 inches long. Something special for REAL COLLECTORS OF ANTIQUE JEWELRY