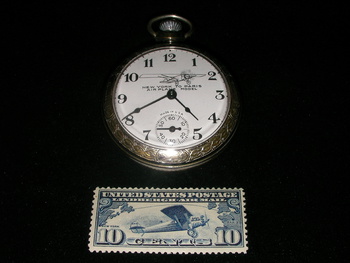 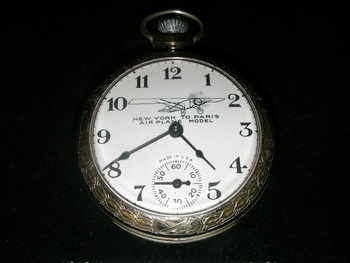 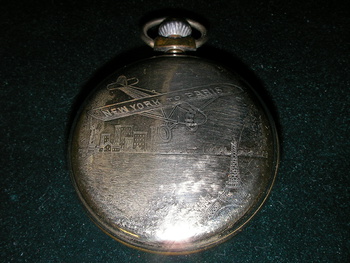 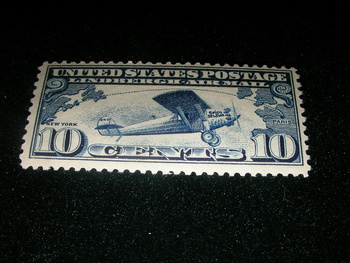 On May 20th-21st 1927, Charles Lindbergh flew crossed the Atlantic Ocean in his Ryan NYP Spirit of St. Louis, thus becoming the first pilot to fly solo and nonstop from New York to Paris.

The Watch - This pocket watch was made by E. Ingraham in 1929 ( 8 29 on movement) to commemorate this event. An image of the Spirit of St. Louis is featured below number 12 on the dial. The back of the watch case features an engraving of the New York City skyline and the Eiffel Tower with the Spirit of St. Louis flying towards the Eiffel Tower with the text "New York to Paris" on the wing. The watch bezel ring also has similar engraving.

The Stamp - On June 11th 1927 when Lindbergh and the Spirit arrived in Washington, the U.S. Post Office Department issued a 10-Cent Air Mail stamp on the same day depicting the Spirit of St. Louis and a map of the flight.

Note : pw-collector has posted the same watch together with an original watch fob which has a small built-in working compass attached : -
http://www.collectorsweekly.com/stories/56483-ny-to-paris-watch-and-fob